My personal favorite level of play in Dungeons & Dragons 4th Edition is the very first level. Part of that is due to the simplicity and purity of the characters that are seen. More than that, adventures at 1st Level, even standardized published WotC adventures, have the a higher feel of threat and danger, and also move combat along at a brisk pace.Many others before me have belabored tips & tricks to help speed play up, or analyzed why players take longer to perform their turn at higher levels, and all manner of related subjects. All of these long-winded speculations are unnecessary. I believe that to capture the feeling of threat at Level 1 through all Levels, one must simply do the math.

Thus, my end goal here is to develop a new, simple chart that shows updated damage-by-level information across all 30 levels of play that keeps the relative amount of damage inflicted the same, starting at the brutality of 1st Level. If you think that the MM3-era math is just fine and are comfortable with the paltry amount of damage your epic tier dungeoneers (who have unprecedented access to healing, resist, boosted defenses, and other ways of negating damage) are taking, then read no further, this article is of no use to you. 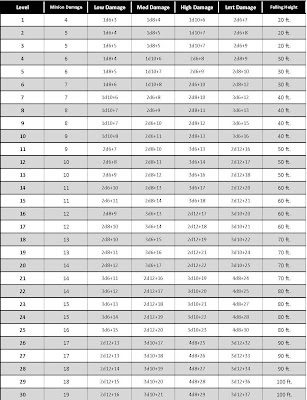 Next, I took these die rolls, found the average results, and then expressed them as a fraction of a typical dungeoneer's maximum hit points at each level. For hit points, I assume a 1st level dungeoneer has 25 HP and increases at 5 HP per level. I feel that's a pretty standard and average rate, and many dungeoneers gain far more than that, but for purposes of this post that would only drive my point home further. 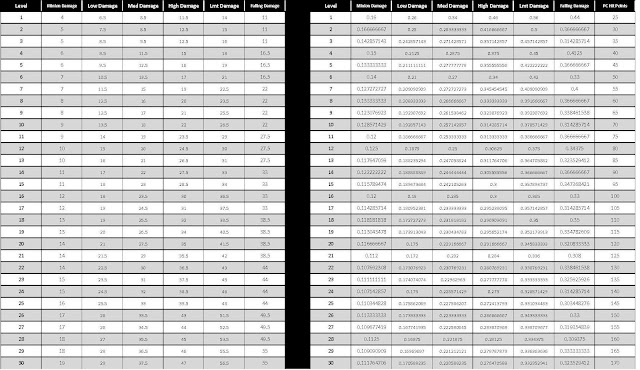 When you take that further and look at all the levels, you'll see a very sharp decline in how much "punch" a typical monster or terrain power does to a dungeoneer as they increase in level, especially in the Limited Damage expressions. As dungeoneers get closer and closer to Level 30, the damage taken drops and the ability to recover from damage increases. This two-pronged defense creates a very hard to kill dungeoneer using typical methods. For me, this is excessively so. 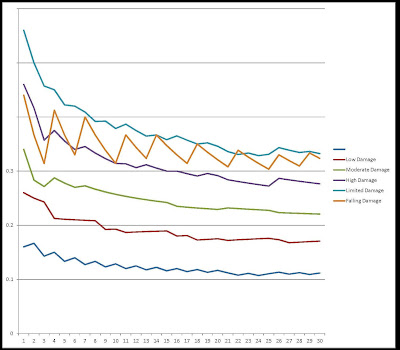 To rectify this, let's take the damage ratios found earlier at 1st Level and apply them to ALL THE LEVELS, like so: 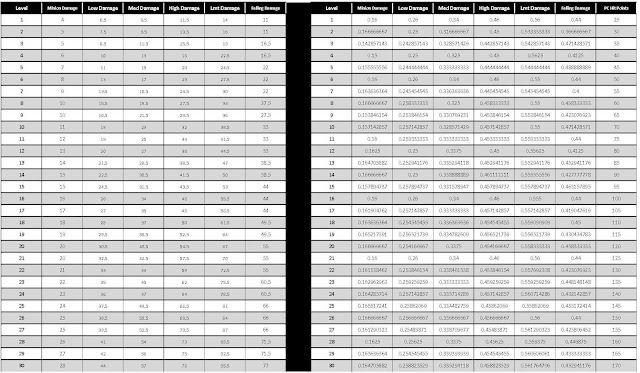 It's then kind of a guessing game as to how one would like to express these average values in terms of die rolls, but I think I've got something half-decent. 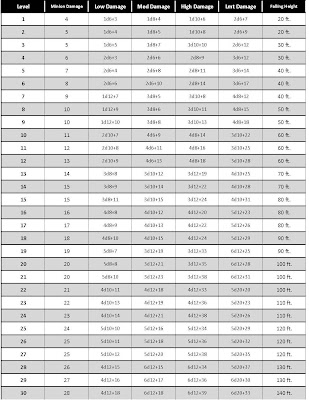 Yikes! Pretty hefty numbers and a big jump even as early as the second half of Heroic Tier. But that is what we're looking for. Finally, we can take a look at a graph of these numbers. 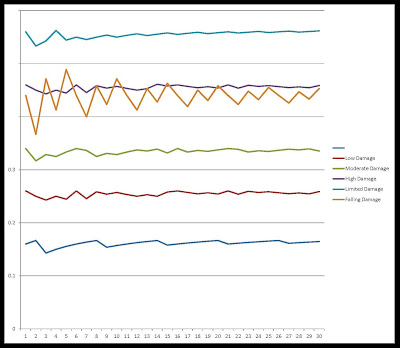 As you can see, there are still some ups and downs, but overall these new damage die expressions give a much more flat and smooth pace throughout all levels. I hope this little tool  and exercise helps out other Dungeon Masters get a better working knowledge of how much their creature's damage values are really hurting the dungeoneers, and how best to challenge those dungoneers in a meaningful way.
Posted by Ross at 2:42 PM