Blade of the Feywild Thunderdome 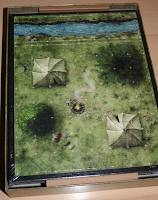 A player in my home campaign was bringing a new character into the group, his previous character having died in the deadly halls of The Iron Lich. He wanted to play an Elven Avenger, out for vengeance against the wretched defilers who had desecrated the resting place of his ancestors via the Garden of Graves in the 4E Tomb of Horrors. As per our campaign House Rules, the player was allowed to start his character with a powerful magic item, however it had to be carefully crafted by both himself and the Dungeon Master. The item needed to be beneficial, but also have drawbacks or hindrances that must be overcome by its user. The player wanted to emphasize the Avenger theme of a duel to the death, and really enjoyed the mechanics behind Adventurers Vault 2’s arcane immurements, the magic “snow globes” that trap people in them. With this in mind, we crafted the Blade of the Feywild Thunderdome. The magic sword whisks the wielder and his opponent away to a secluded battle arena, where they must fight to the death. This suits the Avenger theme perfectly by completely isolating the Avenger’s target. It is also very dangerous, however, as a few bad rolls or crit’ing a Solo or Elite enemy can quickly spell disaster.

Blade of the Feywild Thunderdome
Level 5+ Rare Magic Item
A blade forged from shining steel blessed by the protecting spirits of the Feywild, it calls for all disputes to be settled in the old ways. Two men enter, one man leaves.
Lvl 5       +1           1,000 gp
Lvl 10     +2           5,000 gp
Lvl 15     +3           25,000 gp
Lvl 20     +4           125,000 gp
Lvl 25     +5           625,000 gp
Lvl 30     +6           3,125,000 gp
Behind the Scenes: I typically ignore enhancement bonuses and use the inherent system. For this post, however, I’ve formatted the Blade to be more in line with standard practices.
Weapon: Heavy blade
Enhancement: Attack rolls and damage rolls
Critical: +1d8 damage per plus
Property: Whenever you score a critical hit with this weapon, you and the target of the critical hit are teleported to a pocket dimension called the Feywild Thunderdome.  If either you or the target are dropped to 0 hit points or fewer, both you and the target are immediately returned to the nearest unoccupied square of the respective squares that you occupied. If you are already in the Feywild Thunderdome, you are not teleported, but the season of the battleground changes.
Behind the Scenes: This last ability was made a Property instead of a triggered power to occasionally force the character into some bad situations, activating this ability in suboptimal conditions. This is part of the challenge of being a hero; dealing with the hand you’re dealt and persevering in the face of adversity.
The Feywild Thunderdome
The Feywild Thunderdome is an 8 square by 8 square area with two trees of impassible terrain, as indicated. Creatures teleported into this pocket dimension must maintain the number of squares away from each other they are, however the wielder of the Blade of the Feywild Thunderdome determines which square it is teleported into. When a creature is teleported to the Feywild Thunderdome, roll a d4 and consult the table below to determine the active season in the Feywild Thunderdome.
d4           Season
1              Winter
2              Spring
3              Summer
4              Autumn
Behind the Scenes: The area you want to use here needs to have ease of use as a priority. You don’t want to get bogged down by shuffling around for a precise map, or drawing out something overly specific just for this effect. I tend to use an 8x8 wilderness dungeon tile that has at least one tree, bush, or bit of foliage on it for the spring ‘hungry vines’ power.
Thematically, a Fey magic item tied to the changing four seasons was too much to be ignored. With the Fey, it’s either that or butterflies.
Seasons
Winter
A howling blizzard rages on, at times blotting out the frozen landscape.  The icy winds chill you to your bones.
Freezing Cold (cold) + Trait
Each creature ending its turn in the Feywild Thunderdome takes 10 cold damage per tier.
Behind the Scenes: The auto damage effects of the seasons needed to have a little bite, hence 10 damage per tier, and in some cases dual typed damage to negate resistances. I wanted to make sure that the Avenger character wielding this blade wouldn’t be taken away from the group for too long. The higher the auto damage, the faster that one of the combatants drops and both get spit back into the encounter proper.
Whiteout Blizzard + Trait
Non-adjacent targets benefit have concealment from each other.
Slippery Footing + Trait
The distances of all forced movement effects (push, pull, slide) are increased by 1 square.  Creatures that suffer from forced movement must succeed on a saving throw at the end of the forced movement or be knocked prone.
Behind the Scenes: ‘Slippery Footing’ is taken from the well-done adventure Kalarel’s Revenge, which was the preview/intro to the Heroes of Shadow classes this past March.
Spring
A powerful thunderstorm unleashes a torrential downpour.  In the periodic flashes of lightning, you catch glimpses of lush growth writhing and shifting around you.
Thunderstorm (thunder, lightning) + Trait
Each creature ending its turn in the Feywild Thunderdome takes 10 lightning and thunder damage per tier.
Hungry Vines + At-Will (1/round)
Attack (No Action): Melee 1 (one creature adjacent to a tree); Item Level + 3 vs. Reflex.