In this game, players direct heroes into the village of Barovia in an attempt to free its citizens from the terrible grip of a plague of undeath. Along the way, they will build up town defenses, train militia, and rescue new heroes to swell their ranks. Things won’t be so easy, however, as ghoul raiders, a zombie horde, and the dreaded Count Strahd descends onto the town to wreak havoc and destroy all life.

This game is based upon the Dungeons & Dragons adventures I6: Ravenloft and Expedition to Castle Ravenloft, and takes all images from from www.wizards.com/dnd

Backstory
The medieval village of Barovia lies nestled in a valley underneath the fearsome shadow of Castle Ravenloft, the home of the devious vampire lord, Count Strahd. Being so close to such great evil, the village has a long and tortured history. The village high priest, Father Danovich, has succumbed to the evil and snapped, creating a plague of undeath with a focal point at Barovia’s church. The players represent wandering adventurers who come into town and free the people from this horrible curse. 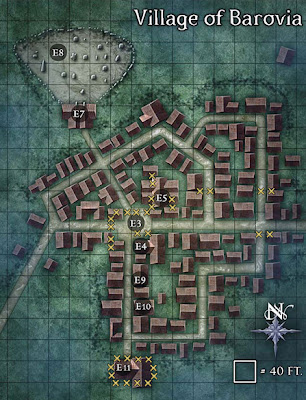 Setup
At the start of the game, have every player (besides the one running Count Strahd) choose a token to represent their hero and place all hero tokens on the indicated space, at the entrance to town. Place one ghoul token at the graveyard (space E8) and one zombie token at the church (space E7). Place barricades as shown on the map. 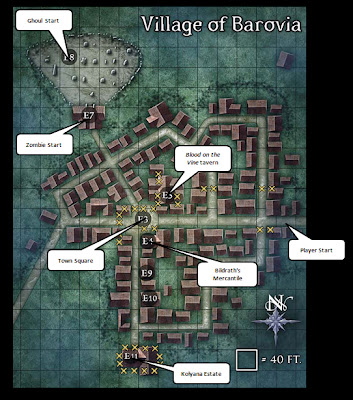 Hero Turn
Each hero takes a turn sequentially around the table. At the end of each hero’s turn, the Dungeon Master then takes a turn. On a hero’s turn, he or she may move their hero 1 space and perform an action, as listed below. Multiple creatures may be in the same space with no penalty. Heroes and enemies may only move up down, left, or right; never diagonally. Heroes and monsters may move through any space, including houses, that is not protected by a barricade. 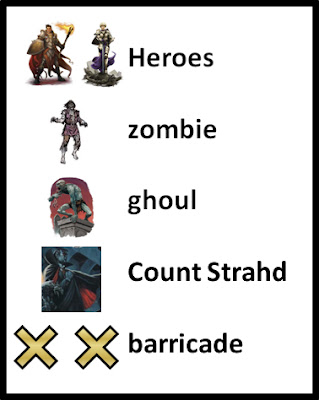 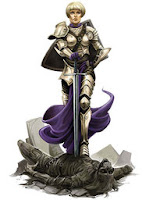 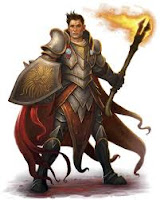 Stop the Zombie Plague – A hero in the Church (space E7) with no enemies in the space sanctifies the church and stops the undead plague, winning the game.

Dungeon Master Turn
After each hero turn, the Dungeon Master takes a turn. On the Dungeon Master’s turn, he or she may move one zombie, or one ghoul, or Count Strahd one space and then perform an action, as listed below. Zombies and ghouls cannot cross a barricade, and multiple creatures may be in the same space with no penalty. Heroes and enemies may only move up down, left, or right; never diagonally. Heroes and monsters may move through any space, including houses, that is not protected by a barricade. 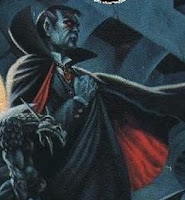 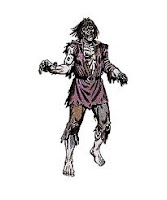 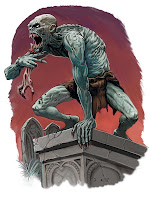 Destroy Site – If a zombie, ghoul, or Count Strahd is on one of the three safe houses (Blood on the Vine Tavern, Bildrath’s Mercantile, Kolyana Estate) in the village, it may destroy that location. Heroes cannot use the action associated with that location for the rest of the game. If all three safe houses are destroyed, the Dungeon Master wins the game.
Posted by Ross at 12:01 AM