Twilight of the Gods: Mena

The other day I described how our Dungeons & Dragons group did the impossible and ascended into true godhood. This week, I will be showing off the new pantheon of our campaign world one deity at a time.

Today, we delve into the character that was most central to the campaign's story, and arguably the most important dungeoneer overall: Mena.


Mena (Tiefling Warlock) was born as the daughter to the campaign's chief villain; the Iron Lich-Queen Abilene. The player of Mena, Erin Sylvester, came up with a rather in-depth and layered character. She was entirely central to the campaign, especially in the later levels, as the plot focused tighter and tighter around the character's family issues. Her character started, oh so many years ago, as a lost and bewildered prisoner of the Arkhosian Empire, having forgotten her early life. In time, she would travel the hero's journey of self-discovery, uncovering the truth about the horrible deeds of not only her mother Abilene, but also of her father, Abilene's wedded husband, Hadriel.

In full disclosure, Erin is dating and lives with the Dungeon Master (that's me), so I may be a bit biased in saying how awesome of a character she was. 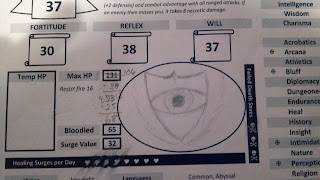 In godhood, Mena's divine peers chose for her the domains of Civilization, Darkness, Love, and Tyranny. Her symbol is the watchful eye, typically emblazoned upon a shield, and is a metaphor for the oppressive conformity of society. She is often depicted as the matron, watching over all of humanity (whom she considers all a part of one extensive tribe), ready to defend against any outside danger. She is the patron of platonic love.

Mena has been known to appear to mortals in the guise of a flickering tower of flames. Hence, her symbol is sometimes decorated by fire surrounding the shield.
Posted by Ross at 1:53 AM

Email ThisBlogThis!Share to TwitterShare to FacebookShare to Pinterest
Labels: divinity