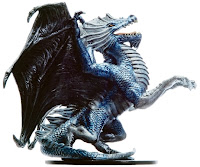 Another item in Keep on the Shadowfell that I felt needed a boost was the Silver Statues of Bahamut, found near Sir Keegan's tomb. Written as is, I don't think they actually did any special effects at all. Or if they did, they were unremarkable and not very memorable. I wanted these hidden treasures to be a bit of a Chekov's Gun, foreshadowing the finale encounter and filling a starring role in that end piece. The items provided below have a negligible effect on actual game balance, but were clutched tightly in hand when the heroes were tasked with closing the dark ritual or Karax underneath the Keep.


Silver Statue of Bahamut
Magic Item
A small, chess-piece sized statue of pure silver. This draconic image provides a boon against the encroaching forces of darkness and shadow.

The Silver Light of Justice
Property: You gain a +1 item bonus to skill checks when performing rituals with the Religion key skill.
Posted by Ross at 1:59 AM

Email ThisBlogThis!Share to TwitterShare to FacebookShare to Pinterest
Labels: keep on the shadowfell, magic items