For the last few weeks, my home group has been exploring a 4E conversion of the much lauded 3rd Edition D&D adventure The Lich-Queen's Beloved. You can read up on some of their prior exploits here. For brevity, I've skipped a few session here and there. The adventure isn't so much timed as it is restrictive on extended rests; many bad, permanent conditions apply to the dungeoneers when they take a rest. As such, some weeks the group is very careful and reserved in their delving, which makes kind of a boring post.

At this point, the dungeoneers have really got this adventure nailed. They've gotten into a good puzzle-solving groove, finding helpful treasures all around and are able to keep up with the main antagonist, The Iron Lich-Queen Abilene, through some quick ritual casting. All the pieces are in place for the finale that will not only end this adventure, but also my entire 4th Edition campaign.

Even with all the treasures and boons the dungeoneers have earned, they are still deathly frightened of the villain. During the course of their delving, they've had a handful of narrow escape from her clutches. She packs quite a wallop in combat, and has indiscriminately killed dungeoneers with a flick of a spell. To further heighten the players' sense of fear, and to give them some interesting strategic insight into their enemy, I created Abilene's Spellbook, placed in Room 37: Library of Bone and guarded by an Illithid Lich.
Capturing an wizard's spellbook has a special place of nostalgia for me, as I can remember that being a fun part of D&D when I started playing in the mid 90's. So, too, I have brought it back to 4th Edition. Abilene's Spellbook consists of all the possible attacks and utility powers she has at her disposal. Since she is such a major villain, she has two full sets of spells which have been substituted and rotated out during the adventure so that the dungeoneers are always in for a surprise when they have a dreaded run-in. Naturally, these are the same Alternate Iron Lich spells that I've written about before, here for use with Revenge of the Iron Lich.

Upon the capture of The Iron Lich-Queen's spellbook, the dungeoneers can then use these powers descriptions as if they were consumable magic items. All of the spells listed are what  Abilene has access to, using all of her full stats. To cast, a dungeoneer can spend the indicated action, make the indicated Arcana or Religion check, and that "page" of the spellbook is consumed in flames. On a successful check, the spell is successfully cast by the dungeoneer. On a failure, it fizzles into nothing and is lost. 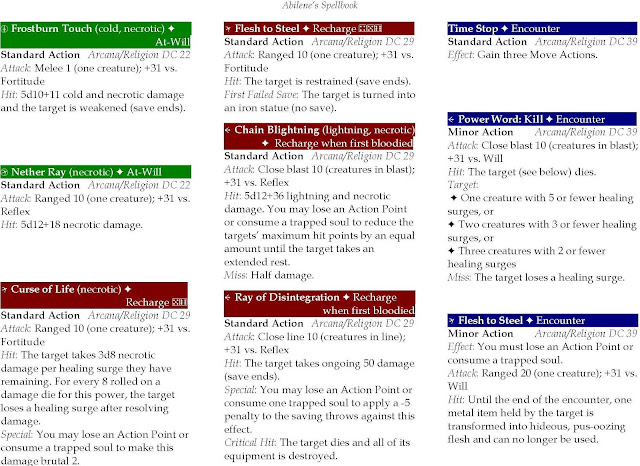 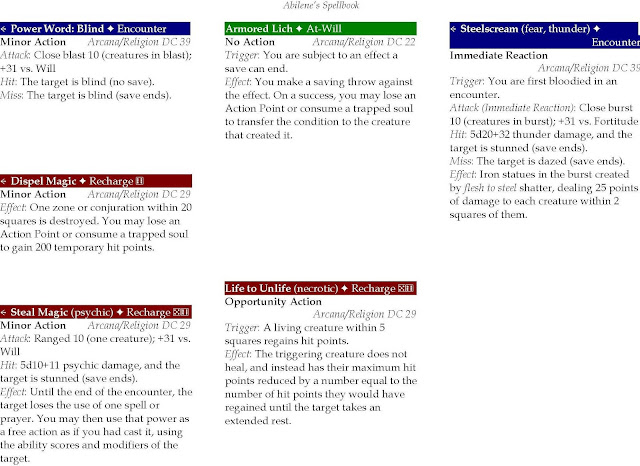 This spellbook idea has been a big hit at the table. Firstly, the players who are very strategically minded have revelled in having such detailed knowledge about what exact effects that have to deal with and survive to conquer this end-game boss. Secondly, it opens up a whole new vista of tactics and choices during the upcoming final encounter, supplementing the dungeoneer's already formidable arsenal of powers with some new and very interesting choices. The players all had a lot of fun cutting up the spellbook and planning out whom should receive which spell, how they could use it to various devastating advantage, etc.

Finally, from  a story perspective, it is incredibly satisfying. At the start of the adventure, it seemed like the whole world was out to get the group. The ectoplasmic doors were incredibly punishing. The monsters were brutal. The puzzles required clues not yet found, and were thus unsolvable. But then, little by little, the dungeoneers have been turning the tables on the adventure. The puzzle pieces fall into place and now are looked forward to, since they hide powerful treasure. The doors are much more easily opened, and are now used defensively by the dungeoneers to slow down their approaching enemies. Now finally, the spells that had been so terrifying and devastating will be used against The Iron Lich-Queen to spell her own demise.
Posted by Ross at 8:14 AM