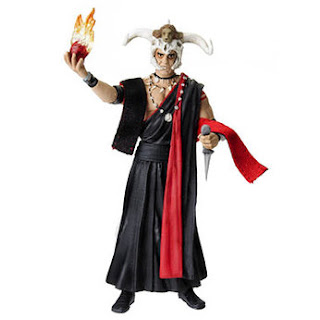 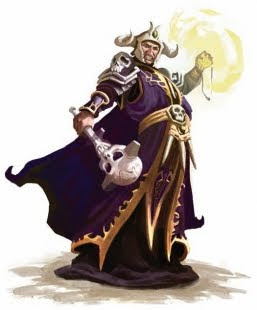 I am convinced that Karalel, the dreaded villain of 4E's debut Keep on the Shadowfell, is based off of Mola Ram of Indiana Jones and the Temple of Doom.
The evidence is overwhelming.

With that in mind, I wanted to revamp Karalel's stats to do a little more justice to one of the coolest enemies that Indy has had to stare down. The first step was to rename him. I felt that Karalel, with three (!) syllables is far too difficult. And then the double-L, it's just hard on the tongue. I opted for something somewhat similar, Karax, and with a nice hard X at the end. The X is for evil. Next, I stepped his level down a notch. As an 8th level elite, as written, he's just too hard to his for most groups (who are presumably at 3rd level) to take. A lot of frustration and boredom came out of adventuring groups just waiting to see how long it took before they could roll a 15+ just to hit this guy. Next, I adjusted the stats based on the new MM3 guidelines. Finally, I took a page from the Mindflayer Mastermind, normally an 18th level Elite Controller from the Monster Manual. The mindflayer has an ability to eat a PC's brain, killing the PC instantly. I felt like that could really play well to represent the mechanics of Mola Ram/Karax/Karalel ripping Indiana Jones' heart out of his chest. While I certainly didn't slavishly recreate a mindflayer at a lower level, but many of the abilities of the mind flayer have been reflavored and repurposed for our dread cult leader. Enjoy!

Email ThisBlogThis!Share to TwitterShare to FacebookShare to Pinterest
Labels: encounter, keep on the shadowfell