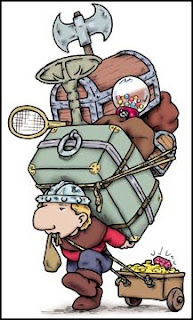 Allies (henchmen, cohorts, etc.) have always had a place in D&D. From the game's earliest incarnations, there have been "mooks" that player characters could hire to do the grunt work for them of exploring trapped passages, hauling heavy loot, and providing a buffer between the PC and the nearest Orc's spear. 4th Edition, as I'm sure you know, very purposefully and very strongly limits the number of actions a player may take with a character. Standard, Move, Minor on their turn. Immediate and opportunity attacks when it's not their turn. This is done to try and spread the spotlight time that all the players get at the table. You don't want any single player taking a very long time per turn, or signifigantly longer than the other players, because then all the other players get bored and frustrated. It stands to reason, then, that henchmen would be totaly anathema to this concept. For some disposable income, couldn't one simply buy a few companions, and have the same player control an army of characters? The DMG2 attempts to address some of this, but I feel like their solutions were a little sloppy. They felt awkward at the table.

What I've been doing is treating NPC Allies in a similar fashion to Wondrous Magic items. But, they're more like communal, group items that can get killed. Any PC in the group can spend one of their actions to make an NPC Ally that they have line of sight and line of effect to do the same action, as shown in their stat block. NPC Allies count as allies in the technical sense (ie. they can provide flanking) and a PC can spend a minor action to make them do a non-combat, simple task such as opening a door, picking up an object, etc.

The NPC Allies I've made all function like minions, in that they have 1 HP and can't be killed on a miss effect, but they all also have a feature (Guarded by Heroes) to keep them alive a little longer. I've jotted down appropriate Levels for the NPC Allies as a rough indication of when the PCs should meet them, and how I figured out their defenses and attacks (if any). Many of the NPCs I'll be posting will be familiar to those of us who slogged through the H-Series of adventures.

Another feature I like to include in my NPC Allies, when I can, are the foils and flaws to their personality. I generally see NPC Allies as neither strictly beneficial nor strictly harmful, so I don't factor them into any XP or wealth calculations. They are there, and the PCs can take them with them or not. With the static defenses the NPC's have compared to the escalating attack bonuses of increasingly higher level encounters, the players will always eventually come to conclusion that their lower-level NPC's are doing them more harm than good, getting in front of the real heroes and landing themselves in trouble. I've actually seen a lot of resentment towards NPC's who don't have desirable special abilities. The players see them, rightfully so, as just an easy way for monsters to nail the group. I've also seen attachment to NPC's who do have traits that helped the group out at some pooint in time, attachment to the point of irrationality and tactical mistakes; an inability to let their 'best buddy' stay back in town. That's roleplaying for you, right there, and it's really something to see.

Enough blather, here is one of my latest NPC Allies, Steven Deschaine. He is a toughened freedom fighter, resisting the tyrannical rule of the Arkhosian Empire. He also is a bit of a bully and womanizer. My thanks to Ryan O'Rourke, who provided the story for this character.

Steven Deschaine NPC Ally (Level 10)
Agent of the Order of the Sheltering Hand.

Guarded By Heroes + At-Will Immediate Interrupt
Trigger: Steven is hit by an attack and you are adjacent to him.
Effect: You are hit by the attack instead.

Guerilla Tactics + Recharge 6 Minor Action
You gain combat advantage against one enemy on the next attack roll you make during this encounter.

Spy Network Property
Steven provides a +2 bonus to all Streetwise and knowledge skill checks made in Iovanthor, capital of the evil Arkhosian Empire.
Posted by Ross at 1:52 AM