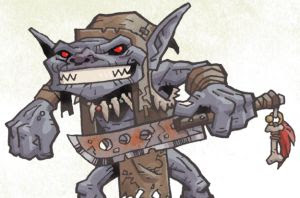 Splug was a fantastic addition to Keep on the Shadowfell, although I think that far too many adventuring groups wrote off the little guy as just another annoying Goblin, there to kill and/or torture for information. They never realized his amazing roleplaying potential. I've seen Splug rise to be loved and cherished, welcomed as an old friend.

Splug NPC Ally (Level 2)
This weak and cowardly Gobin has developed a liking to you, and will follow your orders as long as you treat him well.
HP 1; a missed attack never damages Splug.
Armor Class 15; Fortitude 13, Reflex 13, Will 11
Guarded By Heroes + At-Will
Immediate Interrupt
Trigger: Splug is hit by an attack and you are adjacent to him.
Effect: You are hit by the attack instead.
Hustle It! + At-Will
Minor Action
You command Splug to take a move action (Speed 6).
Shank + At-Will
Standard or Opportunity Action
Splug stabs an adjacent target with a crudely built, make-shift knife.
Attack: +7 vs. AC
Hit: 1d4+1 damage.
Splug Help
Property
All allies adjacent to Splug gain a +1 power bonus to Stealth and Thievery checks.
Posted by Ross at 1:17 AM