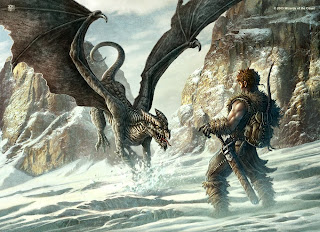 Remains of Empire was a 3rd Level DDi adventure put out about a year ago (or more?), authored by a Kolja Raven Liquette. It is a varied mix of good and bad, but like any good Dungeon Master, I was able to distill out the bad and take the good for my own uses. Really, I think that's the best one can really expect from most published adventures. The gist of it is that the heroes stumble into a village under attack by drakes, they fight off the drakes, chase them back to their lair, and defeat the mastermind villain.

So, what's so bad about it? Well, firstly, the author or editor or whomever is in charge here is having a hard time grasping the full extent of the 4E ruleset. They got some generalities down, and they know how to get from point A to point B, but they are clearly struggling with the ruleset. It's hindering their storytelling. My feeling is that the author originally wrote this for another system, likely 3rd Edition, and then tried to hastily port it over to 4E. Here are my three biggest peeves about this adventure:

1. The Alpine Peak
When the heroes are tracking backthe drakes to their lair, they have to cross a towering mountain peak.

The alpine peak rises steeply. It can be scaled only
with a climber’s kit (hooks, hammer, and pitons) and
rope, which the villagers will provide. The distance
to be climbed is 1,000 squares. The speed of ascent
equals the slowest character’s climb speed per minute
rather than per round. Total climbing times at various
speeds are shown on the table. The climb itself is
tiring and slow but not especially dangerous. Everyone
will reach the peak without mishap; the only
variable is how long it takes and whether the climbers
are ambushed, as noted below.

What function does tracking the speed up the mountain serve? What difference does an extra 4 hours make? Nothing. Nothing. Nothing. These are needless numbers. At best, they take up room in the article and distract the reader. At worst, they eat up an hour of game time at the table as everyone tries to figure out what the group's climbing speed is, why it matters (it doesn't!), and should they make precautions to hurry it up. I like the idea of the mountain being the challenge. I like the idea of low-level characters having to face the bitter cold winds, icy goat paths, and crumbling stone of this thing. This could be a really good storytelling device, I imagine that in the author's home campaign is was really interesting, but here it's just algebra homework.

2. The Floating Debris
It turns out that the drakes' lair is in the ruins of a shattered, floating castle. The imagery is excellent (more on that later), but the mechanics are wonky. Here, the author implies for the Dungeon Master to map out the entire debris field, with random tables. I kid you not. Here's an example, cut out for brevity:


And that's it as far as mechanics go for how this field of floating, shattered castle pieces are interacted with. To me, this implies that the author intended Dungeon Masters to map out every last Tiny size piece of rock, and then let PCs hop from one to the next, at increasingly higher elevations, like an Italian plumber. Do the drakes attack during this time? Are there any additional hazards? Are the players supposed to roll Athletics checks all afternoon and hope their character don't plummet 100ft to their deaths?

3. An Omission
The last big peeve of mine can't be demonstrated by what's there, but more by what's not there. There are no combat encounters, skill challenges, hazards (besides what I've already talked about) that have anything unique to do with the fact that the PCs are on a floating, shattered castle. All the combat and skill challenges and well, everything, takes place in a typical dungeon layout with typical dungeon type enemies. The theme here is serpent cultists of Zehir, but that's hardly unique. I'm paying money for this adventure. Not very much when you break it down, but this is a paid product. And I'm getting generic encounters that I could have whipped up on my own in about 5 minutes with the monster builder, or just the DDi compendium.

Redemption
But this adventure is also really great. The vividness of the fluff is awesome. If you haven't picked up on this yet, let me spell it out more clearly.

The adventure takes place in a floating castle that is also wrecked!!!

Huzzah! But the rules are really getting in the way here, or maybe the lack of rules to really capitalize on this cool idea. The author clearly knows what they're doing in terms of storytelling, but something junked up in the translation to DDi. The Calming the Drake skill challenge, wherein the PCs can gain a drake mount of their own, was fairly well done, but could be a lot better. I want it to be better, because I want these mechanics to be as cool and fun as the idea of the PCs riding through the skies on the back of a drake!
So maybe that's my greatest peeve here. The adventure isn't living up to its potential, and I feel like it should.

What I intend to do in some upcoming posts is try to apply my skills to this great kernel of an adventure and let it grow into something truly remarkable.
Posted by Ross at 11:51 AM

Email ThisBlogThis!Share to TwitterShare to FacebookShare to Pinterest
Labels: remains of empire redux