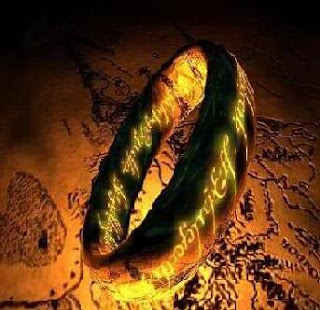 I feel that magic items are another proud nail in the 4E design. Don't get me wrong, out of all the editions of D&D and all the RPGs that I've had the pleasure of playing, 4th Edition, as always, pulls through with one of the most useful, creative, and robust systems out there.

But it's just not quite where I want it. There are a few points to it that bug me and don't work the way I'd like them to, rules as written at least. I'm obviously not the first perosn to write about these things, so please don't go thinking I'm some sort of insightful genius into a realm that no one else has tread. although I do think that I have a pretty elegant solution.

For one, I really don't like what I call the "enhancement bonus arms race". By this, I mean the constant upgrading, buying, and selling of magi items to keep the PCs enhancement bonus, their gear's 'plus', in the right range for their level. Even dropping down to just the three basics: weapon/implement, neck, armor; the games I've run with this idea the magic items feel cheap and common. Really cool abilities and effects are tossed aside in favor of a bigger enhancement bonus. Opening up a treasure chest or looting the corpse of a powerful foe begins to take on the qualities of buying groceries at the store. The items get predictable, and the rate of getting the items is quick and consistant. Or if it's not, the players rightfully call foul.

So, I want to bring a sense of wonder, imagination, amusement, and wait for it, magic back into items. The first step was getting rid of enhancement bonuses in items, and using the inherent enhancement bonus as presented in the DMG2. I use slightly different levels for when PCs receive the bonus (X3rd and X7th), but that's really splitting hairs*. Using the inherent enhancement bonus means that, in theory, the PCs don't even need magic items. If placing a magic item in the story makes sense, I do it. If it doesnt, then I don't. I really feel like D&D and the RPG hobby in general is going this way, as we all get a much better grasp on the mechanics of game design and enjoy the benefits of this currently optional ruleset in our home games. It's built into Gamma World (in a sense), it'll be built into the next iteration of what the designers at WotC are doing right now. Just like when Star Wars Saga Edition debuted new mechanics (swift/minor actions, simplified conditions, 5 minute spell recharge, etc.) and they ended up prominantly in D&D 4E.
Whoa, I'm rambling. Back on track...
Secondly, I want all of my magic items to come with a great cost. In countless literary sources, a magic item has been a thing of dangerous power. The One Ring of Power in the Lord of the Rings trilogy, is a great example. In fact in the expanded literary works of Tolkien, there are many more examples of magic items that have caused both harm and good. The blade Anglachel is a good example, of which I will at one point post up my interpretation of. Not only that, but having great drawbacks in magic items forces yet another interesting decision point on the player. Do I bring this magic item with my character? Do the costs outwiegh the benefits? Some magic items may have minor drawbacks that only serve to add flavor to an encounter when they come up. Ah! The sword's curse bites you in the ass this fight! Others are a day-to-day event.

Lastly, and very importantly, the items need to have wicked cool powers. A cursed items is going to be dropped real quick unless you have some very tempting bait for the player making the decisions; either in the vein of more powerful effects (such as using a common magic item's effect from the next tier up), or something just bizarre and a little unpredictable. Think of the Deck of Many Things, and just tone it down a bit.

One house rule that I've been implementing in conjunction with these new magic items has been that PC's are not allowed access to the enchant magic item and disenchant magic item rituals, although I have allowed all of the players to try their hand at creating a starting magic item for their character. I'm not really sure how I want to handle this one. Magic item creation is definitely a part of D&D culture, as it were. Maybe I'll write more about this on another post.

This of course brings up something that's been on my mind lately: Essentials' magic item rarity. With the new common/uncommon/rare setup, it's entirely possibly that WotC has beaten me to the punch on this one. We'll see how it is when these rare's start cropping up in official WotC products, although after seeing a really bitchin' Tome in a recent Chaos Scar adventure, I'm very excited and optimistic.

With all this in mind, be prepared to see a new, updated model for the evocative Ring of the Dragonborn Emperor. I'll be posting that on this coming Tuesday, I believe.

* Why 3rd and 7th levels for the inherent enhancement bonus? I like to keep the PCs' attack and defense numbers at a smooth transition. When you get big jumps in the numbers, you end up with entire levels where the PCs' aer "behind the numbers curve" and/or ahead of it. I don't like that. Bad math makes bad encounters which ruins my medieval experience. So, having enhancement bonus bumps at even numbered levels doesn't work, since everyone's getting the "+1/2 level" boost. It's especially wonky at 4th and/or 8th when the PCs are getting a bump due to increased ability scores. Also, pushing the enhancement bonus increase to the edge of the Tier (at 9th) would put the PCs pretty far behind the curve for a lot of their adventuring careers. Thus, I've found 3rd and 7th levels to be pretty sweet spots for throwing in enhancement bonuses.
Posted by Ross at 1:19 AM