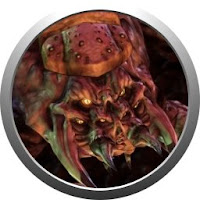 Several sheets of custom-made tokens have been created for use in StarCraft Gamma World. The tokens each have a normal and a bloodied side and encompass a wide variety of people, creatures, and sizes found in the StarCraft universe.
StarCraft Gamma World Tokens – Download here
To help establish the mood of the setting, and to show off the versatility of the system, several pre-generated characters have been created, using a new custom character sheet made specifically for StarCraft Gamma World.
Blank Character Sheet – Download here
PreGen Character: Aedus/Xerxes – Download here
Aedus and Xerxes were high templar who held a deep love for each other. However, Xerxes "died" when he became part of the archon, and his love for Aedus twisted into bitterness. The combined being fell deeper into self-loathing, existing only to hate and hoping to fall in honorable combat.
PreGen Character: Fenix – Download here
Fenix is a protoss zealot and praetor of the Protoss Defense Forces. He personally led his fellow warriors into battle against those who called themselves the enemies of the Protoss Empire. Revered by his warrior-brethren, he has been dubbed the Steward of the Templar.
PreGen Character: Gabriel Tosh – Download here
Gabriel Tosh was raised by on a backwater planet with no facilities to cultivate his latent psionic abilities, which his grandmother believed was "voodoo". Tosh was conscripted into the Confederate Armed Forces, where they recognized his psionic talents, and then later the Terran Dominion. Tosh eventually  went rogue and became opposed to the Dominion, becoming a "subversive rebel group".
PreGen Character: Model HK-180 Devastator Droid – Download here
"I think, therefore I am. I destroy, therefore I endure."
HK-180 was an assassin droid line designed by Holowan Laboratories under direct funding from teh Terran Confederacy. With the Confederacy long a thing of the past, many of their creations have been "misplaced" and set loose onto the galaxy.
PreGen Character: Reaver – Download here
The Reaver is an extremely powerful zerg-based type of hybrid, created in a secret Terran Dominion facility at Castanar. In dark prophecies, it is foretold that the Reavers will destroy the protoss during the end of the universe.
PreGen Character: Sarah Kerrigan – Download here
Sarah Kerrigan was a psychic Terran female. She began her career as a Confederate ghost and later became the second-in-command of the Sons of Korhal. Following a betrayal by her commander, she was captured and infested by the Zerg Swarm, ultimately becoming the self-proclaimed Queen of Blades and autonomous leader of the Swarm.
Posted by Ross at 11:59 AM