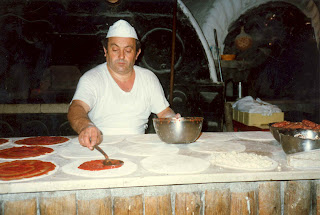 Here's an encounter I ran back in March of this year. I wanted a break in the gritty and grim dungeon crawling, and so had the PCs come upon a kitchen area, stocked with a mad Halfling chef, his crew of cronies, and an unholy abomination: The Lasagna Golem.

The original inspiration for this was a Side Trek adventure put out by WotC in the 3rd Edition days about a wizard and her chef husband who were tripped up by a mischeivious imp. There was a calzone golem in there. I ran the side trek on multiple occsaions, and everyone always had a good time with it.

This encounter also gives the Dungeon Master a great opportunity to stretch their silliness factor and come out with funny names. I always thought Halflings would be more entertaining if they all spoke in Italian accents, so when I ran and wrote this, that's what I had in mind.

Also a note, I always print out the known terrain elements (wheel of cheese, etc.) for my players in very large font and have them on the table as soon as Initiative is rolled. I find it best to let everyone know way up front exactly how everything is going to work.