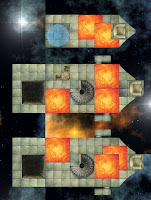 Background
Astral Ambush is a complex encounter I ran for my D&D game. The encounter centers around a derelict Arkhosian Destroyer, a prized warship ready for the taking. The ship is a tempting target for the party, bait to lure them on board. Nearby, however, are several environmental hazards and hiding on board the ship is a lurking villain. Astral Ambush uses the Starship Combat rules provided here, however the encounter can easily be altered to be applicable to an open sea environment.


In the campaign, the dungeoneers have been traveling the vastness of the astral seas on an epic quest to stop the rising Primordials and the resurgent, evil Arkhosian Empire. Earlier in the campaign, the PCs had stolen the personal astral skiff of the Illithid Ambassador, Alberhoon, during a daring escape from the Arkhosian capital, Iovanthor. Doing so had earned the ire of the powerful Mind Flayer, and thus a recurring villain had been born.
Up until this point in the game, the dungeoneers had been traveling in the posh shuttle craft, going from world to world on their quests. Although luxurious, the astral skiff was vulnerable to direct confrontation from the Arkhosian Empire's patrolling vessels. A key weak point in the adventurer's defenses and plans, I knew that this was something I could hook them in with.
Alberhoon has now set in motion his plans for vengeance. They are detailed and overcomplicated, as a cruel villain's should. The Illithid Ambassador has arranged for a powerful astral vessel to travel near a dangerous part of the astral sea, near where the PCs will be traveling. The ship itself has suffered devastating damage, flames burning throughout the ship and choking the corridors with smoke. The crew has been devastated, with only a relative handful of survivors remaining. Alberhoon has arranged for this perfect setup to draw forth his true prey: the PCs.
Features of the Area
* A garbled S.O.S. message comes through to the dungeoneers' astral vessel, calling for help. The message is sent in Draconic, and tells of the crew's decimation and the status of the ship.
* The source of the message is blocked by a violet cloud of gas, a nebula. Streaks of lightning flash across its surface.
Exploration
* The astral seas are filled with aether, a clear fluid that acts similar to breathable air.
* The doors to the Arkhosian Destroyer are unlocked and can be opened with a minor action.
* The Arkhosian Destroyer starts the encounter badly damaged (180 HP). Fires erupt from its interior in great jets.
* Fires fill approximately half the hallways in the ship. Any creature that enters or starts its turn in the fire takes 2d8+10 fire damage.
* Smoke fills all the areas of the Arkhosian Destroyer, granting concealment to all creatures within.
* The Arkhosian Destroyer has an active teleportation circle on its lowest level that an be used to board the ship via a teleportation ritual.
Encounter
* Alberhoon (Mind Flayer Unseen, Level 18 Lurker; Monster Vault). Alberhoon wields an Imposter's Talon (see 'Treasure') and thus can take the form of any creature he slays.
* Twelve Arkhosian Crew (Level 18 Minion). Descended from the mighty red dragons, the Arkhosian Crew have resist 15 fire.
* Black Hole
Black Hole Level 18 Elite Obstacle
Hazard XP 4,000
A deadly black hole draws in all ships and objects within the nebula, tearing them apart in its tidal forces as a swirling spiral of debris grinds into its maw.
Initiative +14
Attack
Standard Action Close burst 100
Target: Each astral vessel in burst
Effect: The target takes 2d12+20 damage.
Special: Any creatures in the burst not protected by an astral vessel are drawn into the accretion disk of the black hole and are lost forever, their component atoms spread across hundreds of miles of swirling gas and debris.
Countermeasures
* The crew on board an astral vessel can attempt to break free of the black hole's grip by engaging in a complexity 2 skill challenge.
6 successes. Each failed skill check deals 20 damage to the astral vessel.
Primary DC 23; Secondary DC 32
Special
Characters must make these skill checks from both the engine room (channeling more power into the ship's propulsion), as well as the control room (navigating through the fluctuating gravitational fields).
Trump
A timed explosion at the rear of the craft deals 20 damage to the ship, but earns 1 automatic success
Fold
A character in the control room of an astral vessel can aim the vessel towards the black hole. Doing so is a standard action that provokes opportunity attacks. The next attack from the black hole deals maximum (33) damage and each creature on the astral vessel slides 3 squares towards the back of the ship.
Tactics
Alberhoon hides in the ship, emerging only to strike out at a dungeoneer who has been isolated from the group. Alberhoon uses the smoke-filled hallways to his advantage as much as possible, and utilizes the power of his imposter's talon to cause disorientation and hesitation when he is eventually found out.
The Arkhosian Crew are unwitting pawns in Alberhoon's game. They are panicked, and attack any intruders they find on their vessel. They are unaware of the Mind Flayer's presence at the start of the encounter, but obviously know that some enemy force has placed them in their current predicament. If presented with a dire situation, such as having only a few crew remaining, the proud warriors will attempt to destroy their vessel in an act of self-sacrifice.
Treasure
* Arkhosian Destroyer
* +4 Imposter's Talon (Fourthcore Armory; page 7)
Story Alternatives
* Instead of on the astral seas, this encounter works very well on the watery seas of the natural world. Replace the black hole with a similar whirling vortex of water. The center of the vortex acts as a gateway between the natural world and the abyss. Instead of teleportation circles, dungeoneers can board the Arkhosian Destroyer by means of more traditional ropes, ladders, and gang planks.
* Instead of a villain orchestrating an overly elaborate plot, Alberhoon can be replaced by a mindless, stalking predator that has slipped aboard the Dragonborn vessel and has caused all of this harm. The PCs, in this case, are simply passing by and get caught up in the madness.
Posted by Ross at 9:48 PM