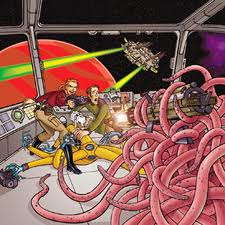 This past summer, I had the pleasure of trying out a local Maryland tactical game, BATTLESTATIONS!  The game depicts a generic setting space combat; with a fluid flow from ship-to-ship combat (laser cannons, torpedoes, stellar objects, evasive maneuvers) to hand-to-hand combat (boarding parties wrestling control over ships, sabotaging weapon systems, racing to repair a derelict vessel). One scale directly affects the other, and makes for a really satisfying replica of the military scifi genre. It was really a blast.

As a side note, I felt that the editing and execution of the game's rulebooks were absolutely terrible. These ugly, mostly cosmetic problems were covering a beuatiful piece of design. A tragedy, really.

After playing, I thought about how much I'd really like to port that experience over to enhance my usual roleplaying games. I'm not very familiar with that many scifi RPGs, so maybe there's one out there that already does a good job of this and I'm just reinventing the wheel. BATTLESTATIONS! makes little attempt to add any real roleplaying elements into the game, and that's fine. The game has characters with names and stats, an experience point system, etc. but that is clearly not the focus here. The focus of BATTLESTATIONS! is on spaceship combat, with a little RP injected to keep things fresh. I wanted a roleplaying game, with an occasional naval combat element to spice things up.

Naturally, I start at the draiwng board that is the 4E D&D engine. I took a look at a very popular campaign done by Chris Perkins, Iomandra, and stole liberally. My own home campiagn ended up as a mix between Iomandra and Star Wars - a watery world dotted with tiny islands, with an oppressive, globe-spanning Dragonborn Empire repressing the peace-loving citizens and the start of a new rebellion, led by a motley troupe of unlikely heroes.

Next, enter the Air War Skill Challenge, one of the rare bits of non-editorial work at Critical Hits. Putting all these things together, I came up with a half-decent system of adding a satisfying ship-to-ship combat element to 4E for the traditional naval vessels (in Heroic Tier) and onward to the Astral Seas (in Paragon Tier), and finally did a quick workup of the vessels shown in StarCraft. I'll be posting all my work in the coming week:

Thursday - StarCraft Vessels (appropriate for my Gamma World version of StarCraft)
Posted by Ross at 1:08 AM