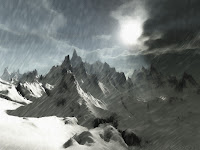 Latherna is overseen closely by the Raven Queen's guardians of Winter, and has close ties with the realm of the Frost Prince in the Feywild. It is a horrid and lonely place where life goes to become numb to the world and die. It's icy plateau's are endless in both size and cruelty.

I based this location on The Plateau of Leng.


THE ICY WASTES OF LATHERNA – Random Event Table (d20)
1              Make an Endurance check, Easy DC by Level, to fight off your desire to sleep in the numbing cold wastes. On a failure, you freeze in the night and lose all Healing Surges.
2              You move towards the light and warmth of a nearby fire, and find a captive man bound to a pole above a cooking fire. If you want to try to free him, make a Thievery check, Moderate DC by Level, to carefully untie his ropes. On a success, you gain a Rescued Prisoner NPC Ally. On a failure, he falls into the flames and dies.
3              The chill wind grows to such extreme cold that no living thing can stand against its life-sapping frost. Lose 1d4 Healing Surges and start the next combat encounter weakened (save ends).
4              You look around fearfully, and see that you are lost in an endless expanse of featureless, snow-covered land. Make a Nature check, Moderate DC by Level, to piece together which direction to go. On a failure, you take Normal High cold damage by Level from wandering through the night and take a -10 penalty to your next Initiative roll.
5              It suddenly strikes you that you've never been so alone and so lost. It doesn't seem possible that you'll ever get back home. This feeling of dread assaults your mind: + Level + 3 vs. Will; Normal High psychic damage; Miss: Half damage.
6              You come across the ice-encrusted bones of those who came here before you. Make a Perception check to find some helpful relics. On a success, you gain your choice of either a consumable magic item or a ritual scroll equal to your Level or less.
7              The icy ground crack s underneath you, and a gaping chasm begins to form. Make an Acrobatics check, Moderate DC by Level, to quickly move out of the way. On a failure, you trip and fall, taking Normal High damage by Level
8              The cold chills your soul and steals your warmth. The chilling wind attacks you: + Level + 3 vs. Fortitude; Normal High cold damage by Level.
9              The icy winds tear at your flesh, and the plains seem endless. Lose 1d4 Healing Surges and make an Endurance check, Hard DC by Level, to withstand the journey before you. On a failure, lose 1 additional Healing Surge.
10           The rotted husk of an undead spider moves to attack you with cold and calculating eyes: + Level + 5 vs. Armor Class; Normal Moderate untyped damage and Normal Moderate poison damage by Level.
11           The rickety bridge collapses as you cross it. Make a Strength check, Easy DC by Level, to hang on. On a success, you find a relic on the other side and gain 1 consumable magic item equal to your level or less. On a failure, you plummet into darkness and are lost forever.
12           There is something buried in the ice, and it looks useful. Make a Dungeoneering check, Moderate DC by Level, to pry it free without breaking it. On a success, gain 1 consumable magic item equal to your level or less.
13           Through the haze and mist, you make out human forms and hurry toward them. Roll a d20. On a 10 or higher, the figures are a friendly group of adventurers who help you brave the dangers of this cold land. Gain 1 Healing Surge and a +2 power bonus to Endurance checks until you take your next Extended Rest. On a 9 or less, the figures lower their hoods and reveal themselves as flesh-eating zombies, who then attack you: + Level + 5 vs. Armor Class; Normal Moderate damage by Level and you contract Zombification (see Revenge of the Iron Lich).
14           While you are climbing a high cliff, you begin to slip. Make an Acrobatics check, Moderate DC by Level. On a failure, you crash down the mountain, taking Limited damage by Level.
15           You are taken to a prehistoric monastery, where a high priest in a yellow silken mask questions you. Make a History check, Moderate DC by Level, to answer him to his satisfaction. On a success, you are blessed by the priest and gain resist 3 all (per tier) until your next Extended Rest. On a failure, the priest curses you, and you gain vulnerable 5 all until you reach your next Milestone.
16           You find yourself faced with a difficult decision. An ancient being identifying itself as a servant of the Raven Queen has offered you power, but warns that it comes with a price. If you accept, gain two ritual scrolls of your choice with a level equal to or less than your own and lose 2d4 Healing Surges.
17           Your mind and body are toughened by your experiences in this desolate, frozen waste. Gain a permanent +1 bonus to Endurance checks.
18           An enormous stone marker covered with arcane markings stands before you. Its true purpose is unclear, but you think you may be able to translate a small portion of it. Make an Arcana check, Moderate DC by Level. On a success, you gain a ritual scroll of your choice with a Level equal to or less than your own.
19           Looking at the vast distances you still have to cross, you feel as though all is lost. Take a -2 penalty to all attack rolls until you recah 3 Milestones from the feelings of overwhelming despair.
20           Placing your hand on the ancient cave painting, you have a vision. You may immediately cast the Aria of Revelation ritual without paying any component cost.
Rescued Prisoner                                                                      NPC Ally (Level __)
HP 1; a missed attack never damages the rescued prisoner.
Armor Class 13 + Level; Fortitude 10 + Level, Reflex 12 + Level, Will 10 + Level
Guarded By Heroes + At‐Will
Trigger: The rescued prisoner is hit by an attack and you are adjacent to the rescued prisoner.
Effect (Immediate Interrupt): You are hit by the attack instead.
Hustle It! + At‐Will
Minor Action
Effect: You command the rescued prisoner to take a move action (Speed 5).
m Dagger + At‐Will
Standard Action or Opportunity Action
Attack (Melee 1): One target; +2 + Level vs. AC
Hit: 1 + Level damage.
Posted by Ross at 1:32 AM