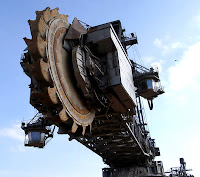 This vehicle is supposed to represent a humongous mining machine, built by those ever-crafty Dwarves. It's got a hirling, chainsaw-like edge that wraps around the thing, 3" thick steel plating, treads, and a bullnose front. Because it is so large and unwieldy (18 squares total), there are restrictions to this device built in to limit the amount of utter devastation the PCs' can cause with it through natural cave chokepoints, etc. Although, please, don't stop them from coming up with really creative solutions to get this mega machine of death out under the open skies.

I've found that a repair cost of 100 gp per Hit Point of damage generally keeps these sorts of things outside of the realm of abuse, and I encourage you to do the same.

Pilot
The pilot must occupy the front seat in the rock cutter and have both hands free to manipulate its control levers.

O Cutting Blade + Aura 1
While the cutting blade is active, all creatures starting their turn adjacent to the rock cutter are subjected to the following attack:
Attack: Melee 1; + 5 + Level of Pilot vs. Armor Class
Hit: 1d8+6 damage.

Sealed
Creatures inside the rock cutter cannot gain line of effect to those outside (and vice versa), though they have line of sight to each other through reinforced windows.

Out of Control
During any turn in which the rock cutter is not brought under control, it becomes out of control. An out-of-control rock cutter comes to a stop at the beginning of its turn and its cutting blade deactivates.

Earthwalk
The rock cutter is not affected by difficult terrain due to rubble or earth-related effects.

Drive + At-Will
Check: Thievery DC 11 (DC 15 while bloodied)
Effect: The rock cutter is brought under control and moves up to 4 squares in a straight line and can move through a Medium or smaller creature’s space; see also ram.

Email ThisBlogThis!Share to TwitterShare to FacebookShare to Pinterest
Labels: vehicles