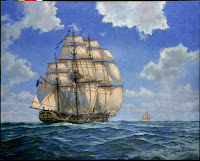 BASICS
Enemy naval vessels are adding to combat encounters much the same way as creatures, each contributing their designated XP to the encounter total. Enemy ships, obviously, are only appropriate in encounters where they can threaten and interact with ships under the command or protection of the PCs. Non-Combat vessels are ships that do not possess any weapons that are dangerous to other ships, but often represent support craft, transports, civilian vessels, and other targets of opportunity.

Vessels in combat are considered to be continually moving under their respective propulsion systems, and do not require a specific action to control. Ships positions relative to each other are not physically represented, but are instead assumed to be moving about on the battlefield at some distance to each other. 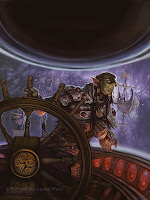 To fight an enemy ship, a character must be in a command chair, located somewhere on each vessel. Command chairs need not be chairs per se, but can be any form on ship or weapons control, such as a helm wheel. While in the chair and operating the ship, a character is prone.
While in the chair, a character may spend minor actions to make offense, defense, or feint checks against one enemy vessel, using skills deemed appropriate, similarly to a Skill Challenge . Bluff is commonly used for feint checks, whereas Thievery is often used for offense and defense checks. History can also be used to call upon military tactics, etc.


* A successful offense check deals 3d12 damage to an enemy ship.
* A successful defense check reduces the next damage your ship takes from the enemy by 10 in the Paragon Tier and 5 in the Heroic Tier.
* A successful feint check provides a +2 bonus to the next three checks you make with your ship.
* A successful feint check positions your ship close enough to the enemy vessel for boarding, or evades an enemy boarding attempt.
* If a character uses an Encounter power with an appropriate effect with a skill check, that character gains a +2 power bonus to the check.
* If a character uses a Daily power with an appropriate effect with a skill check, that skill check automatically succeeds.
* At the end of each round, each enemy vessel deals its damage to a single allied vessel of the PCs, and then declares whether it will attack again, or attempt to board one of the PCs' vessels. If the enemy vessel attempts to board an allied vessel of the PCs, a character onboard the allied vessel must make a successful feint check to evade the boarding enemy vessel.
* A successful boarding attempt allow occupants on both vessels to move between the  two as a move action, using whatever means appropriate. For example, docking collar, swinging on ships ropes, extending the plank, etc.

Here is a sample vessel:

There are multiple upgrades you can buy for your ships. Each upgrade costs 5,000 gp for astral vessels in the Paragon or Epic Tier and 500 gp for water-bound vessels in the Heroic Tier. Players are encouraged to create new and innovative upgrades to their vessels

Ships and crew consume fuel and supplies while travelling amongst the stars. An astral vessel in the Paragon or Epic Tier requires 125 gp worth of residuum fuel per Size Category for each voyage from one world to the next.
Water-bound vessels and their crew in the Heroic Tier consume 10 gp worth of supplies for each voyage from one island to the next.
Vessels can typically hold four voyages' worth of fuel or supplies.

These settings have no currency system. To use the ship rules in these settings, assume that all ship Hit Points are repaired at an Extended Rest, do not keep track of fuel or supplies, and grant ship upgrades in place of a distribution of Omega Tech.

It is assumed that the PCs are operating as pirates, raiding the imperial ships when they can. As such, their opportunities for selling off captured boats, and making big profits, becomes more limited. There's nothing wrong with making a profit by raiding ships at sea, but it's more fun to steal the gold from an Imperial Luxury Liner than it is to scavenge and pawn junked ships.

Always have guards permanently stationed on enemy vessels to repel PC invaders. Typically, I will have 2 Minion crew pilots and 1 Standard guard per ship size, of a level equal to the ship. These creatures do not contribute to total XP of the encounter and are considered part of the vessel they are on. In addition, a ship can carry a boarding party to go on the offensive and bring the fight to the PCs' front door.

Don't be afraid to have boarding parties take the PCs' ship if they keep gallavanting off and stealing every vessel they come across.

PCs operating a fleet of smaller vessels are susceptible to a large boarding party. The PCs suffer a distinct disadvantage when they are spread out across multiple ships. A boarding party full of Skirmishers will make short work of any ship with mostly ranged PCs piloting it.

Ships from different Tiers never fight.
Posted by Ross at 1:17 AM