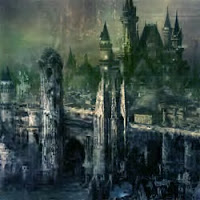 The Shadowrealm holds more secrets than all other planes combined. Its fabric is mystery. Its nature is to disguise. Hidden in the endless gloom of the plane lurk domains of dread—dark realms of tragedy and horror that draw victims down in circles of destruction. Few know of these places, for few ever escape. One such is Sunderheart. Called 'The Funeral City', Sunderheart is a necropolis filled with the mindless dead and watched over by malevolent spirits with god-like powers.

This table also works pretty well with Orcus’ domain of Thanatos, or any really nasty, evil place full of undead. Random Event #14 is my personal favorite. It’s pretty Fourthcore, potentially tricking you into switching your primary stat bonuses to Dex and Con, which would be devastating for a lot of characters out there.


THE FUNERAL CITY OF SUNDERHEART – Random Event Table (d20)
1              "Help me! Set me free and I shall reward you with forbidden knowledge." The voice comes from a glass cylinder containing a floating brain! If you help the brain free, you gain a permanent +2 item bonus to a single skill of your choice, but take psychic damage equal to your Level every time you fail a skill check with that skill.
2              A dark, creeping fungus flows across the ground. It attacks you: + Level + 3 vs. Fortitude; Normal High poison damage by Level and you start the next combat encounter slowed (save ends).
3              A horrible, undead creature stares at you with burning eyes. It is as if its gaze were stealing your soul. It attacks: + Level + 3 vs. Will; Normal High necrotic damage by Level.
4              The tormented spirit of a ghost forces its way into your body. Make a Religion check, Moderate DC by Level, to immediately exorcise the possessing spirit. On a failure, you begin your next combat encounter dominated (save ends) by the ghost.
5              As you stare up at the unfamiliar sky, you hum a song that your mother used to sing to you, and it helps to hold the madness at bay. Gain 1 Healing Surge.
6              Make a Perception check, Moderate DC by Level, avoid becoming lost in the twisting alleyways of the city. On a failure, you take a -10 penalty to your next Initiative roll.
7              A shambling horde of the undead surrounds you in the dark and the creatures tear at you with an attack: + Level + 5 vs. Armor Class; Normal Moderate damage by Level.
8              The groaning cacophony of the natives echoes from nearby. Make a Stealth check, Moderate DC by Level, to remain hidden. On a failure, the creatures find you and perform dark rituals upon your mind. You wake up later, seemingly unharmed, but take a permanent -2 penalty to a single skill of your choice.
9              The creature's grip is like steel! Make an Acrobatic or Athletics check, Moderate DC by Level, to break free and escape. On a failure, the creature's grip tightens with a sickening pop and you take Limited damage by Level.
10           The spirits of hatred and death mock your hopes. "You'll never return home!" they cackle. Make a Religion check, Moderate DC by Level, to mutter out a prayer of hope. If you fail, lose 1 Healing Surge from the supernatural terror and hopelessness that fills your senses.
11           The heavy, foul stench of untold legions of the dead drives you down towards unconsciousness. You are attacked: + Level + 3 vs. Fortitude; Lose 1 Healing Surge and begin the next combat encounter unconscious (save ends).
12           The light of the gods is gathered here, in a hidden corner of this otherwise forsaken city and unbeknownst to the guardians of Sunderheart. Either gain 1 Healing Surge or remove a failed Death Saving Throw.
13           The undead horde that had been chasing after you abruptly abandons their pursuit. Something had scared them off, and you don't plan on waiting around to find out what could frighten the hungry dead. Make a Stealth check, Easy DC by Level, to avoid the notice of this horrible abomination. On a failure, your body and soul are devoured by this unspeakable, god-like entity of malevolence.
14           The dark entities residing in this place offer immortality... of a sort. If you accept, you immediately change your character race to Revenant (Dragon 376, p. 28) with the Past Life of your previous race. Any feats or powers for which you no longer meet the prerequisites for can be immediately retrained. If you do not accept, the entities consume off a portion of your soul, and you fail a Death Saving Throw.
15           The dark entities residing in this place offer you knowledge beyond the ken of mere mortals. However, the dark entities demand a payment from you in the form of a sliver of your life force. If you accept their offer, you may immediately cast the Consult Oracle ritual without expending any component costs, but you lose 2 Healing Surges.
16           An unholy creature formed from hundreds of discarded body parts pursues you and attacks: + Level + 5 vs. AC; Normal High poison damage and Normal High necrotic damage by leave.
17           The sun is so far away. Everything seems hopeless. Lose 1 Healing Surge from overwhelming despair.
18           This part of the city seems recently abandoned. Make a Perception check, Hard DC by Level, to search for anything useful the former inhabitants might have left behind. On a success,  gain 1 consumable magic item of your choice equal to your level or lower.
19           You are swept away by a river of black, liquefied putrescence. Make an Athletics check, Moderate DC by Level, to climb out. On a failure, you are swept downstream and drowned in rotting flesh, losing 3 Healing Surges.
20           You open a door to an ancient crypt, and are quickly overwhelmed by a noxious, poisonous gas filling the room. Make an Endurance check, Easy DC by Level, to hold your breath long enough for you to escape. On a failure, you lose 3 Healing Surges.
Posted by Ross at 1:18 AM