Add Mystery in Your Dungeon

Just the other day I had the great pleasure of playing in a game of D&D, as a player, and having an amazingly fun time. If you're the kind of person who spends their free time looking through the internet to read obscure D&D blogs like DMG 42, then you're probably like me and don't often get the opportunity to be on that side of the screen. So, you understand well what an opportunity it was just for me to be in that seat. The campaign I'm in is set in Dark Sun and we're almost out of Heroic Tier. I've only been involved with the group for a short while, I'm really just filling in for a missing player that had to be out of town for a few months, so I don't know a lot of the background or story details. Although, honestly, I don't very much care to know the story details.

One of the other players, surprisingly not myself, had privately mentioned to the Dungeon Master that they would appreciate a little more challenge. A little more Fourthcore, if you will. The player, Matt, has quite a mastery of the 4E system, he's a "min/maxer" type with a reputation for simply annihilating standard issue combat encounters with ease. It's quite something to watch, really. He goes by Bohrdumb on the Fourthcore Team Deathmatch Play-by-Posts and the WotC boards, for those who care. Thankfully, our Dungeon Master happily obliged. This is something that shouldn't just be glanced past. It takes a little bit of guts to do something like this, from both the player and Dungeon Master. Both are making the game more stressful, more thoughtful, and less reliant on easily obtained DDi adventures. Things go out on a limb, things go past the prescribed ways to setup combat encounters. Of course, this is done because things also get fun!

What we ended up with was a great 3 hour session that was sort of two run-on encounters at once, sort of 5 separate rooms at once. We had a sort of break in between combat, although it was hard to tell where the bold lines were; where one fight stopped and the next one began. Everything was fluid and organic, as if we were actually exploring a dungeon! The whole affair was a gauntlet of running from a constant stream of exploding skeletons, into tight corridors with a bone-swarm golem, to a room with a strange, unexplained metallic device swirling with burning light (ouch!), a Rubik’s puzzle-sphere, a tomb to the world's last paladin, a deadly, crumbling, tilted cavern, and a finale set piece struggle between the paladin's resurrected spirit and some weird, unexplained evil black snake thing; crushed by boldly grabbing a hold of a trap trigger in an insect-covered cache and crushing our enemies with a 50' wide portcullis.

The whole session ran just like that paragraph; fast, furious, and a little confusing. Not everything made sense, nothing was explained. It was part of the mantra "show don't tell". We were shown the dungeon. We were shown the results of our actions. We never knew for sure what anything was or what anything did (or didn't do). It was an immersive experience to the players, and an extremely game-y kind of design for the Dungeon Master. We got lost in the moment, a bit of panic running through us as we felt extremely threatened and knew that our character's lives hung on a thread. We forgot about our individual characters and their petty wants and focused on 1). the group's survival, and 2). the implied story of the dungeon.

I came home from the game late at night and after a long day at work, but instead of feeling drained and tired, I felt energized. I've been on a recent nostalgic trip playing one of the more influential games of my youth, DooM (circa 1993), and played a few levels. That session of D&D and exploring of DooM's halls got me thinking about the two and how they were very much related in spirit. In the original DooM, the player is shown the results of the implied story, but never explicitly told. There are bodies of dead marines littered about, but you are never explicitly told what happened there. The beginning levels show some modern-looking facilities, but they're exact function is left very ambiguous. As the game progresses, there are hints about the sinister depths which the scientists went to achieve their results, but only by exploring the myriad, strange environs and seeing the results. The level of the game's graphical technology also plays a role here, as many details simply can't be shown. Travelling through these digital dungeons, the player's mind is left to squirrel around and wonder at what it's taking in. We fill in the blanks with our own imagination, and the game is made the better for it.

Nightmare Realms of Hell - H is for Hellscapes

The closer to the end of the game we get, the weirder things become. Any semblance of sense or logic is thrown out of the window. The levels are somewhat haphazard in their design; not that the game designers didn't know what they were doing, but in that these places simply couldn't be real and are completely non-functional in the real world. These things all have the effect of creating a bizarre, nightmarish world or mystery and danger. It creates a hellscape.

Think about your own dreams and nightmares. They are scary, they bring in many of your thoughts from the real world, but they are unexplained and have bizarre details. Think about the monsters in DooM. The zombies are pretty straightforward, the Barons of Hell have fairly conventional analogies in mythology and can be described without much trouble. Everything else? What the fuck is that? They're mysterious, they're nonsensical, and they're magical. They make the player wonder what's going on. They're surprising and a little scary. This is beginning to sound a lot like the D&D game I just had amazing fun playing, and it sounds a little Fourthcore.

A comparison: DooM (1993) vs. DooM (2004). The earlier game is so much more crude, so fewer pixels, so much more limited in terms of technology available and man-hours spent designing. The original, however, succeeds in ways the more modern game can't even dream of. 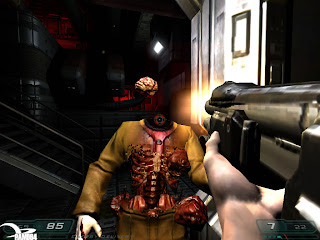 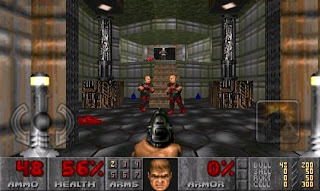 Arthur C. Clarke is famed for saying "Any sufficiently advanced technology is indistinguishable from magic." The not-knowing is what makes the magic and the mystery. Explaining a game's plot (video game or tabletop RPG) through cut scenes, dialog, and found journals spells out everything for the player(s) in a clear and concise manner. That "technology" is explained, so it stops being so advanced, it starts being commonplace and loses all of its "magic". We see this ideal carried over in some common religious celebrations. Santa Claus can slip into your chimney and deliver toys to children across the world in one night because he's magic. The Easter Bunny inexplicably is connected to the resurrection of Christ, and hides eggs. What? Why? Magic. The oil that was supposed to last a night instead lasts a week. Magical lights!

Hang on for my next post, later this week, as I take this idea and run with it, describing how I've carved up the D&D 3E adventure "The Lich-Queen's Beloved" to added in a sense of mystery and take away all the explanations that ruin my dreams and the players' nightmares.
Posted by Ross at 2:19 PM