This is the first part of a series of posts I will be doing that provides commentary and guidance on running my 4E D&D conversion of the 3E adventure "The Lich-Queen's Beloved", found here.

I've also added quite a few embellishments from the Fourthcore Alphabet into the mix, but have not made those parts too public so as not to be posting huge pieces of a paid-for text.


If you're a player in this game, please stop reading now so I can surprise you at the table!

The opening scene to this dungeon takes place outside of Susurrus on the Astral Seas. The heroes of the campaign are set on the end goal here: they need to destroy Abilene the Iron Lich before she is able to siphon off the divine energies from the corpse of the dead god Ioun. Abilene has jammed her collosal Sepulchral Tomb-Vessel Palace, Susurrus, into the chest of Ioun and surrounded it with an array of defenses and the accumulated astral navy of the Arkhosian Empire. The body of Ioun is also choking the Living Gate, which somehow allows mind-bending horrors from the Far Realm to cross into our world. In short, the whole of existence is threatened. To get onto Susurrus, the dungeoneers must gather together a fleet of astral warships from the various allies they have made during their travels, punch through the enemies' defenses, crash land onto the surface of Susurrus, and pop the only hatch leading in.

As a group, the players are given 200 Astral Diamonds to spend on Astral Vessels and Mithril dragons with which to assault an unknown enemy force. All of the astral vessels were slapped together using commonplace monster stat blocks, adjusting levels and reskinning them into spaceship. The cost to "buy" the monsters made spaceships are roughly analogous to their XP value. During the game, we found that teleportation powers were extremely useful in this encounter, so I've redone the costs with appropriate premiums. There are no vessles with melee attacks, with a notable exception I'll get to later. Each player controls a grouping of vessel, for example one player controlled all mithril dragons, while another controlled all Dwarven Explorers. We used simple WotC D&D tokens to represent the different ships.

The centerpiece of the encounter is a black hole which pulls vessels towards it. The black hole has an event horizon edge that immobilizes vessels as an effect, dooming anything caught in it to be dragged into the black hole and destroyed. A moving comet burns and blinds vessels, astreroids (spiralling into the black hole) provide difficult terrain, and a gaseous nebula allows the vessels to play hide 'n seek, Wrath of Khan style. The enemy vessels begin the encounter hidden in the nebula cloud. The encounter ends when either the last of the dungeoneer's vessels is destroyed, or when the dungeoneers reach Susurrus.

The encounter went splendidly. I designed it to be specifically "unfair" if the dungeoneers chose a simple and direct "kill 'em all" strategy; the enemy vessels have more XP value than what the dungeoneer's vessels could possibly have. However, the encounter is cunningly easy if the players focus on their goal of reaching Susurrus, or use really clever tactics. My guys absolutely hosed the enemy by means of the mithril dragons' zones to keep enemy fighters, aka minions, at bay; while the Elven Abductors cleverly teleported the capital ships into the gravitational well of the black hole. Once a few decent moves panned out, this was a cakewalk. It rewarded the players for their insight and strategy. 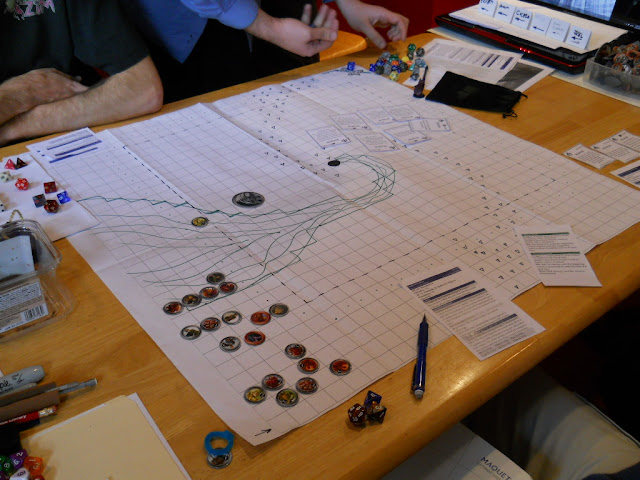 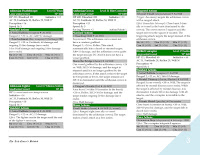 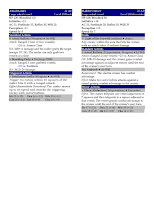 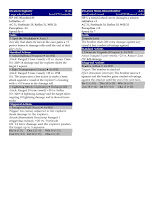 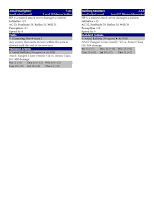 Something that struck me as odd when doing this conversion was the extent that the 3E-era needed to justify and codify everything. The original adventure has established game mechanics and described caster levels to explain every little bit of Susurrus. Quite frankly, it's unneccessary and destroys some of the magic and mystery of the adventure, as described in this week's earlier post.

The dungeoneers entered into this mostly empty room via a hatch in the ceiling. An illusionary image of the Lich-Queen opens the dungeon crawl with a hackneyed taunt to the dungeoneers, setting the tone, reminding the players whom they're after, and establishing the idea that Abilene the Iron Lich-Queen is watching their progress. I also added some flourish here with a ruby-colored glass floor. The floor takes incoming starlight and illuminates sets of constellations in an unending, cyclical pattern. This earned the players a handout describing all of the constellations of the campaign world, which represent the 20 gods of the pantheon. This whole sequence confounded the players a bit as they tried to puzzle it out. Little do they know, however, that this is merely the clue to defeating/solving a difficult trap/puzzle that I've added in later, in Area 16.

The players were handed a map of Susurrus, showing no real details, but allowing them to see the shear size and scope of this dungeon and setting in place a future puzzle of sorts as they will undoubtedly attempt to fill in and explore all the squares.

Being the first time the dungeoneers have entered Susurrus, they are each attacked by the streamlined and set Whispers of the Damned:

Attack: +25 vs. Will
Hit: The target takes a permanent -1 penalty to their healing surge value and cannot use powers outside of its turn until it reaches 3 milestones. 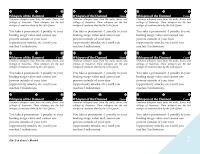 This attack is working well so far, being punishing enough to take heed, and having a small, long-term penalty that will make the players think strategically about when and where they can take their rests. I also allowed the use of the Remove Affliction ritual at a -5 penalty to the roll to remove these effects (except the healing surge penalty). While some may say that this makes the adventure too easy, I find that the relative cost of the ritual and lack of my group's funds have been making it not an easy choice to consistantly use.

Working with the penalties from Whispers of the Damned (which promotes forgoing extended rests) is the difficult to open ectoplasmic doors surrounding the room. When touched, the door attacks.

Attack: +25 vs. Reflex;
Hit: 3d6+12 damage and the target cannot use daily powers or action points until the next extended rest.

These doors made this "empty" room really interesting to watch as the players went through trying to explore the doors and figure out how they ticked. This 4E game immediately took on a fantastic "old school" feel of exploration, wonder, and good old fashioned dungeon crawling. They tried to touch the door, attacked the door, looked around the door for clues, and eventually learned of the way to open them.

r Open Ectoplasmic Door
Terrain Power
At-Will
Move Action
Ranged 5
Check: Intelligence, Wisdom, or Charisma DC 30; or expend one psionic power point.
Success: You open one ectoplasmic door within 5 squares. The door closes at the end of your next turn.

4th Edition really shines here because it allowed me, on the very first try, to slap up stats for this door that are easy to run, easy to figure out the appropriate level of punishment for failure, and easy to determine what stats are needed to get a workable chance at success. Coming out of this room, the group now has started thinking critically here. They have a de facto door opening guy and established door opening procedures. The character with the highest Wisdom, and who is suffering from the doors' effects already, tries to open the door. He has a better than average chance to get it, but it's nowhere near gauranteed. The group's Defender then stands in between the door and the opener (providing cover), while the opener uses his standard action to beef up on defenses with total defense.

Let me put that in perspective for you. This group of Epic Tier characters, none of them using a simplified Essentials-type character, all of them with a heaping pile of powers, are now excitedly using cover and total defense to beat the dungeon. They were goddamn proud to have come up with this plan.

Having mastered the art of opening a door, the group starts exploring. They find the Fiendish Dragonborn Deathlord Captain on the other side of the door. This Arkhosian creature wields an ethereal blade of hell, and breathes bolts of blightning out of his mouth. He is blinded, his eyes carved out if their sockets and the emptiness covered bya crimson cloth, as he uses magic to see the world. When the dungeoneers see him, they spring into action, pull him to their side of the door, and let the ectoplasm close; keeping the dragon-mount on the other side. Zr'kiil, and the dragon later at their leisure, are easily cut down, barely being able to attack before destroyed. The players feel great about this.

Added into this room is a two-tiered, wooden display of 12 brass bells of various sizes. The bells are labelled in Deep Speech with the letters ABCDEF GHIJKL. When rung in the correct order, a secret treasure cache is revealed. When rung incorrectly, a painful trap is triggered. The solution will be found later in Area 25, as I added a grandfather clock that rings the solution when its hands are at 12 o'clock. The dungeoneers wisely leave the bells alone, but are puzzled by it and are dying to figure it out.

The dungeoneers walk right into the mouth of the beast. I've since upgraded this room to have more descriptions of violence (dessicated bodies, etc.) and a few more bells and whistles. The majority of that was overlooked completely by the dungeoneers as they tried to take in all the different creatures and things happening at once, so I'll describe that when they return to this room. I will say, however, that I beefed up Abilene's stat block to a Level 26 Solo. With all of her servants, this would make an encounter with 59,800 XP; about a Level 27 Encounter for five Level 21 dungeoneers. The players were quite in disbelief, and thought that this creature might be an illusion or clone of Abilene. They didn't think that the "end" encounter could be basically adjacent to the entrance to a dungeon this large.

The wizard in the group lucked out on initaitive and quickly got a spell in, Sleep, that slowed down and (with the help of some feats related to the orb wizard class feature) temporarily knocked Abilene unconscious. Abilene's opening barrage of utterly brutal spellcasting coupled with the group's accurate estimation of her defenses told them that this was the real deal, and not the kind of fight they could live through.

Wisely, they never entered the room proper.
Luckily, the ectoplasmic door was closing quickly in the initiative order.
Mercifully, I decided that Abilene would let them run so that she might toy with them as a cat does a captured mouse.