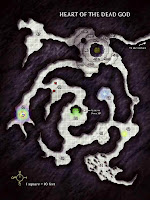 This post continues to document the journey through The Lich-Queen's Beloved (4E). The up to date conversion and latest notes and changes inspired by the actual play can be found here. Have at thee!


IF YOU ARE PLAYING IN THIS CAMPAIGN, DON'T READ THIS

Iron Lich Gets Pissed
at this stage of the game, Abilene the Iron Lich isn't messing around anymore. In fact, I reckon she's a little worried about the meddling of her daughter and her god-like friends, and has started taking time away from the Iron Lich's ascension to godhood rituals to deal with this threat. Abilene, knowing that the dungeoneers will likely die in Vor Rukoth,  sets up Vlaakith Symbol spell traps at the entryways to the portals to catch any few survivors from their expedition. A Marilith is also assigned to guard over the Reliquary. Through the use of cunning and surprise, the dungeoneers had turned an area that would have them slaughtered (by my count, an N+6 encounter) and made it a benefit by recruiting a platoon of allies.

Seeing black, magic symbols emblazoned on the ground, the dungeoneers callously sacrificed the Halfling astral merchant-sailors to "disable" the traps while the Marilith was cut down.

Heart of a Dead God
I really took to the Fourthcore Alphabet's hellscapes chapter to heart here (no pun intended). In our story, Abilene had taken the dying body of Ioun and jammed it into the Living Gate separating our world from the Far Realms. With the advice and description in FCAB, I was really able to turn the creepy factor up a notch. There was a lot of squirming at the table in these areas, people were genuinely grossed out and refused to explore some rooms fully due simply from being too creepy. In particular, Room 44. Divine Breath 's pool of afterbirth really hit the group hard in the vomit-inducing category.

Also, to emphasize the organic nature of this dungeon, I used a hex map. Hex maps are a lot of fun to break out from time to time, giving a sense of altered movement and mechanics, while at the same time working smoothly with the 4E mechanics.The visual effect of simply not having long, straight lines makes the whole dungeon feel different.

The Phylactery
As the group explored this dungeon, they did indeed finds Abilene's phylactery, although they are still a bit unsure that it is what they think it is. The phylactery itself is a steel sphere, smooth on one side, hovering in a room full of super bright light (automatic 15 radiant damage at the start of each turn). On the flat side, an inscription matching the assembled pieces of astral driftmetal, of which the group has found 3 / 4 pieces, the fourth piece resting safely alllll the way back in Room 7. Abilene's Throne Room.

Upon touching the phylactery, however, the dungeoneer's awaken its guardian.

Dessakrul & The Rod of Wonder
A three-headed roar fills the chambers, as Dessakrul the Guardian [Lvl 26 Solo Brute] is awoken. Using the new normalized damage expressions, and being now 4 levels higher than the dungeoneers, this guy packed a whallop. He was utterly brutal and relentless. Despite some really clever tactics, including a short domination to fly and drop him into his 200 ft. treasure-hoard pit, they group didn't even have him bloodied when they were all starting to get into dangerous territory hit point -wise. They called a "tactical retreat", beating a hasty escape, but not before plucking the single magic item in the dragon's hoard: The Rod of Wonder (FCA). To slow down the rampaging, deadly dragon, all of the dungeoneer's active henchmen, including the astral merchants, were left behind as speed bumps and sacrifices for the greater good.