Reincarnation and a Fun Way to Die 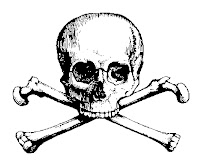 Update: I'm not as clever as I thought! Rob Schwalb did something similar awhile ago here.

In addition to my own Dungeon Mastering, I also am able to step around to the other side of the screen (metaphorically, since we don’t use screens anymore) and play the other half of the game. Not only is it a ton of fun, but it also gives me some insight onto what it’s like to be on the receiving end of some deadly dungeons. This post talks about some interesting and fun mechanics we created to handle the issues we were  having with death and resurrection in D&D.

The campaign started out not long ago, we’re on session #4 I think. Like many others, this campaign was a fiery rebirth from a collapsing prior campaign I was in where shifting schedules made time outside of work became too much a premium for about half of the group. The current party is generally all of a similar mindset. Although we have varying subtleties in our gaming tastes and have varying levels of proficiency with the game, we all enjoy creating optimized characters, defeating very difficult and deadly challenges, and exploring dungeons. As such, we decided at the campaign start that we would have a single, unifying theme: we had an all-Dwarf party. With only a thin veneer of plot from the Dungeon Master, we took what we had and ran with it creating The Seven Sons of Moradin. There are, of course, only six players; the seventh son being setup as some sort of mysterious end-quest.

The campaign is set in Dark Sun, which restricts our available classes considerably, although frankly we revel in that sort of thing since those restrictions are themselves a form of challenge, especially when coupled with our self-imposed racial limits. We have also fully embraced the Dark Sun added rules in a more challenging way than most. With the Dungeon Master’s permission, the players elected to apply the following house rules:

Sidebar: Why Dwarves?
Quite simply, they are the best race for dungeon delving. From a fluff standpoint that makes a lot of sense. Dwarves are very often depicted as living their lives underground and having an innate knowledge of the ways of the world outside the reach of the sun. From our mechanical optimization standpoint, we saw fantastic choices in feats, a racial bonus to the often used Dungeoneering skill, great selection for racial ability score modifiers, a great racial bonus against poison saving throws (which can often carry with them save or die effects), and resistance against prone and forced movement, which can easily spell the end of a party via push effects into extremely hazardous terrain.
And of course, the crown jewel of the race, second wind as a minor action, negating our reliance for a leader or magic items for healing.

Over the course of play, we have lost a dungeoneer. The dead dungeoneer was expected, I was actually surprised we have had so few deaths considering how much we goad the Dungeon Master and tempt fate. Right before this happened, literally 45 minutes beforehand, we all got together and hashed out some ad hoc rules on how we would handle the inevitable piles of dead bodies in what I think was a novel and clever way. We started with the basic premise that the current rules as written for resurrecting fallen dungeoneers and creating new characters to add to the party were leaving us all feeling a little dissatisfied and unfulfilled. Death had little sting, and was just a road bump and an annoyance. Even with the death penalty (-1 to all d20 rolls for 3 milestones), there was little real challenge. And we wanted a challenge. To solve this, we harkened back to some of the fun things in the game that we all remember back from when we were new to the hobby in the early 90's.

When a dungeoneer dies, his body passes away, but his spirit lives on for eternity. However, to complete our quest, we must gather together all Seven Sons of Moradin in their living, Dwarf bodies. While we search for a new Dwarf body for our fallen comrade, his spirit forcibly inhabits the unwitting body and mind of someone else. A total party kill ends the campaign in failure.

That night we created, off the top of our heads and on the spot at the gaming table, a random race and random class reincarnation table, limiting ourselves to what was available for Dark Sun and eschewing the easy path of gaining another Dwarf. This system provides a means for the player to remain a part of the game every step of the way, creates a challenge and a lasting threat by handing out often sub-optimal race/class combinations, and throws the whole group a curveball with potentially wacky random results.

Various different class options are lumped under their more generalized names and left to the discretion of the player as to how they want their dungeoneer to represent that class. For example, a player  forced to play a Fighter could choose their dungeoneer to be a Weaponmaster, Knight, or Slayer.

Take It A Step Further

Although not particularly useful for me, I figured some readers would enjoy seeing a similar table expanded to include all of the races and all of the classes, at least what was available at the time of this posting. The frequency of the races and classes is ad hoc and determined mostly arbitrarily by me, so don’t feel like there’s any real logic behind them.

After the session wherein we created these reincarnation rules, we asked the Dungeon Master to pre-roll all of our soon-to-be reincarnated forms so that we could bring backup character sheets to the games and not end up bored for an hour when we had a dungeoneer suddenly die. Here are our results, and I quote:
“Here are the next lineup of characters (I rolled for all of you, except matt, who already has his new character). MAN! You guys are fucked!
1) Samorodin - Goliath Sorcerer (HAH!)
2) Hap - Mul Bard (double hah!)
3) Andy - Goliath Barbarian (...not bad actually)
4) Kevin - Tiefling Shaman (haaaaaaaaa)
5) Ross - Thri-kreen Warlord (heh)”

What do you think? Have you handled death and dying in a unique and interesting way in your game? What worked? What didn’t? Don’t tell me about how you use rules as written; I already know plenty about those.

Any tips on how to optimize a Thri-Kreen Warlord?
Posted by Ross at 3:12 PM