Red Hand of Doom: Enemy at the Gates 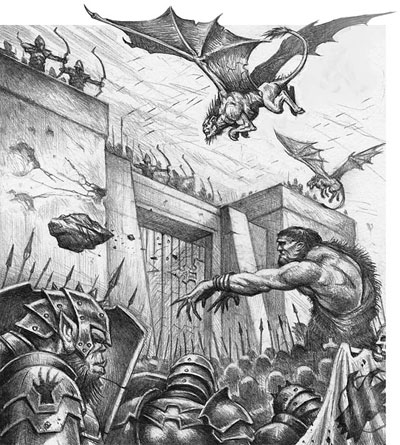 from wizards.com
This chapter was one of my favorites to convert over. Almost the entirety of it focuses on an epic struggle to defend the city of Brindol from the advancing Red Hand horde. After the party has role-played through the beginnings of the chapter, restocking consumable magical items, finding new NPC Allies, etc., they engage in a freeform skill challenge to make battle plans for the defense of Brindol, convince any of the town's movers and shakers to their side of things, and do the actual fortifying of the town. Once the PCs have run out the clock on the ongoing campaign calendar, The Red Hand Horde attacks, with an overarching skill challenge representing the PCs and allies commanding the hodge podge Rebellion fleet Elsir Vale army, broken up by individual combat encounters representing crises situations which the PCs must rush to (such as when Hill Giants devastate the town walls), as they are the only heroes capable of handling such a threat.
The adventurer’s should be around 7th Level by the time the actual fighting starts.
The Battle of Brindol awesome skill challenge extravaganza uses a modified version of the Air War Skill Challenge, one of the rare bits of non-editorial work at Critical Hits.