Rule #7: The skill challenge goes on as long as it has to.


The 7th Rule of Skill Challenges is the same as that of Fight Club: it goes on as long as it has to. I'm talking specifically about the Complexity of a skill challenge, the number of successes that it takes to win.

Many of you are doing your skill challenges wrong. Bad fun wrong. This can be easily felt at the game table as a wooden, forced experience during skill challenges. Internet trolls and the haters on forums love to bash 4E's skill challenge system because of this feeling of artificial construction that so often rears its ugly head.

The subject of improving skill challenges has been gone over extensively the last few years. There's a lot of great information and advice out there, and that should certainly be taken in. The Trump/Fold mechanic of Fourthcore (as shown in adventures S1: RotIL and C1: CotG) springs to mind as a great addition to any skill challenge. This post, however, aims to change a more fundamental aspect of how skill challenges should be presented and run at the table.

Here are some examples of common pitfalls that happen during skill challenges which make my stomach turn:

1). A dungeoneer stretches believability with nonsense uses of a skill and shoe-horns every skill check he makes in a skill challenge to fit into the few skills he has with high modifiers. This happens repeatedly and consistently, making for a predictable, and thus boring, chain of events at every skill challenge. A common occurrence of this that I see is a high-Dexterity character trying to justify an Acrobatics check for jumping, when an Athletics check clearly makes more logical sense. This breaks my immersion in the game, because the player is purely focused on number crunching. This dungeoneer is ruining my medieval experience.

2). The companion to the example above, this time on the Dungeon Master's side of the screen, is when the suggested skill checks of a skill challenge are seen as a hard railroad. If the Acrobatics check above makes sense in the narrative, I want it to happen no matter what the adventure's author has in mind. Don't tell me what I can't do!

3). As the scenes winds on, a feeling of completeness and closure comes upon the group, but the Dungeon Master (adhering to the stated Complexity of the skill challenge) drags the scene out until he reaches the precise number of successful skill checks. Or, similarly, keeps the scene going despite completely devastating in-story results that logically should have ended the scene in a "failure". In either case, the general idea of a Dungeon Master not ended a skill challenge scene where deemed appropriate to the narrative.

All of these examples of Skill Challenges Gone Wrong shouldn't really be too surprising. Dungeons & Dragons is a very math-oriented kind of game. Almost every aspect of the game requires simple addition, and the number of elements to the associated functions gets very high very fast. Think about your typical D&D combat, in any edition, and all the accumulated small rules bits that get put into it. Roll initiative, that's one bit. Add initiative modifier, that's a second bit. When you start breaking down each of these pieces, these things that most veteran players know instinctively, the mathematical complexity of the game is absolutely astounding. And any math-heavy game like this is going to:

1). Attract players who tend to think that way, and
2). train players to think in the kind of methodical, rigid system that mathematics requires.

The common theme in the 3 problems I've outlined can be traced to an over-reliance on mechanics and prescribed methods, and an under-reliance on flexibility and using common sense.

The source of this problem is the formatting of skill challenges. The mechanics of a skill challenge can be described in the simplest terms by Level and Complexity. Since the dawn of time (or at least spring 2008), Dungeon Masters have seen the same general format of skill challenge, and these are the mechanical elements always listed first, indicating the author's/designer's intent for the mechanics to be first and foremost.

What should be intended and used as the concrete foundation of a scene instead turns into a steel cage of entrapment and restraint. Already in a methodical mindset, the Dungeon Master and dungeoneers go through each prescribed step of the skill challenge and turn what should be a fun scene that has a lot of room for easy injections of roleplaying into a dice rolling contest. Not only that, the dice rolling contest gets another notch of tedium to it due to the math of the 4E system favoring the dungeoneers so much (assuming they are forcing skill checks to the skills of their choice).

The solution is to let the events surrounding a skill challenge unfold organically. Make dice rolls as appropriate. Describe the actions. Make sure everyone participates. Gauge what actions would even require a skill check and assign them Easy, Moderate, or Hard difficulty classes on the fly. Decide if a specific action or condition will grant a Trump or Fold without any die rolling at all. And then, and here's the most important part of this whole post:

Stop the skill challenge when it feels right.

Treat the listed Complexity of a skill challenge as only a guideline, a hint from the author as to approximately how long he feels the skill challenge should take. If your group is cunning, they will succeed at the challenge faster. If they are more direct in their thinking, your group may take longer (ie. more rolls) to finish the challenge.

When you, as Dungeon Master and supreme arbiter of the campaign, decide that the skill challenge, the scene, has reached a satisfying conclusion; tally the number of successful skill checks involved to backwards-engineer a Complexity level that reflects how much time the scene actually took.

Don't bother tracking failures. A mainstay of skill challenge discussions has always been that a Defeat never stops the narrative, and this is simply taking things one step further. Failures don't "end" a skill challenge, they only add twists and unexpected surprises to a skill challenge. Sometimes this forces the narrative to an unfavorable result for the dungeoneers. Very often, that unfavorable condition will then force another dungeoneer to go out of their skill-set comfort zone and make an interesting and creative check with a sub-par skill to try and save the situation. For example:

DUNGEON MASTER: The guard notices the pendant of evil hanging about your neck, and takes no heed of your honeyed words. A scowl crosses his face as he levels a sharp spear at you. (This is an example of a Fold condition.)

DUMB BARBARIAN: Crap, I'm up, my character has terrible social skills, and this guard is about to ruin our chances of getting into the castle. I am now forced into making a skill check for which I have uncertain odds! Logically, intimidation might make this situation even worse, so ... (speaking in-character) "Thog come in peace. Thog come to castle to bury evil gold away from bad wizard. Let Thog and friends in?"

The dungeoneer rolls a Bluff check with baited breath! Depending on the outcome of that check, the party might make lie their way past the gaurd, or maybe need to regroup and try to sneak over the castle walls or discover a secret underground passagein, or perhaps use a ritual to giev them a way in. If they get frustrated enough, the dungeoneers can always fight their way through. In any case, the story moves forward in a natural way, responding to the dungeoneers actions and ending when they have reached their goal. 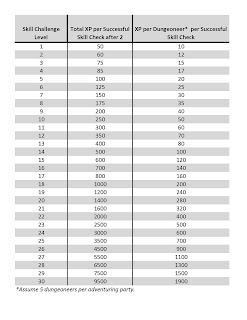 Something that I do that I also suggest is to not bother splitting the experience between the actual number of dungeoneers. The difficulty of a skill challenge isn't significantly any higher or lower with more or fewer dungeoneers. Assume there are 5 dungeoneers in every party and distribute experience accordingly.

SIDE NOTE: Want to encourage more roleplaying and skill use and less combat? Change the 'carrot' incentive and award more experience points for skill challenges and quests. Double or even quintuple experience points awarded. The dungeoneers will begin to realize that the easiest way to victory is by avoiding combat. Going even further than that, I recommend not even counting experience at all. The dungeoneers gain a level when they complete a Major Quest. As the saying goes; less math, more wrath.

This isn't rocket science. This isn't some major breakthrough in game design. It's common sense; something that all too often gets disregarded by far too many Dungeon Masters. I think a lot of 4E naysayers would click their tongues and wag their fingers, appalled that this idea should even have to be explained. That’s the thing they don’t realize, though. There are new players to this game, and they don’t have the same experiences the grognards do. What’s old hat to some is the new cool to others. Don’t hate.
Posted by Ross at 11:01 AM