This post continues to document the journey through The Palace of Whispers, as started here.
Picking up where we left off from the last game, the dungeoneers had (very briefly) faced Abilene the Iron Lich after stumbling into her throne room. Some very lucky rolls delayed the penultimate Level + 5 Solo villain of the adventure enough to give the dungeoneers a moment to retreat. Abilene had managed to cast a spell on the Shardmind Invoker of the group, turning his floating rocky body into a statue of solid steel. Failing multiple saving throws, he was petrified. Forever!

Or at least until the group found an old potion of flesh restored they had lying around. In this campaign, all magic items need to be physically present at the table in the form of a small printed card, or else it is unusable. It's a good method of keeping track of things, and makes sure that the players take some time taking care of their character sheets and whatnot. It does also place some burden on me, the Dungeon Master, as I'm responsible for having a printout of all treasure. However, I've found this to be a minor inconvenience. Also, dungeoneers are forbidden from crafting magic items.
Even though the group solved that problem/dungeoneer death very quickly, it hurt them pretty bad. That was their one and only potion of flesh restored, and it certainly won't be their last run-in with Abilene the Iron Lich. This session had a lot of fat trimming from the stores of magic items accumulated over the years, as the dungeoneers are looking to at everything they can get their hands on to give themselves an advantage.

In this room, a Dragonborn Knight waits patiently in a magic holding circle that prevents him from leaving the immediate area. This Knight is waiting for the Lich-Queen's judgment, so that he may be welcomed into her service as an undying Fiendish Dragonborn Deathlord. I've got this whole 'fear of death' theme going for the Arkhosians. Through the dungeoneers previous actions in the campaign, they've thwarted and stomped on the tyrannical Dragonborn Empire (in space), to the point where the Arkhosians are making desperate deals with Abilene to keep their species and culture alive.

Now wary of the dungeon, the crusaders decided to parlay with this Knight. His backstory was unfurled, it was a good opportunity for the roleplayers in the group to get in some talky-talky fluff. The Dragonborn was then killed. Kill bad guys, take their stuff, right?

Lastly, I've added into the room a crumbling, multi-thousand-year-old sandstone statue. The statue is shaped to look like one of the dungeoneers (an Elven Avenger), and there are five more scattered throughout the adventure. I planted this in here to serve as an unexplained mystery. Just like all the bullshit on Lost, this will go completely unexplained and allows the players to leap to their own conclusions. In actual play, this is exactly how the players reacted, and they are determined to come back to this room and try to solve this mystery. 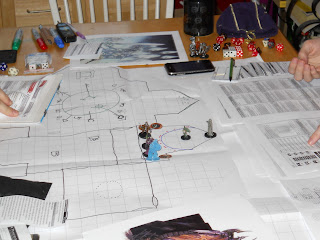 This room is a major encounter with the creature distribution equivalent to two separate Level 19 encounters at once. (Party Level is 21). It has the potential to go extremely badly against the dungeoneers and wipe them out. By the time the group had come into this room, however, their tactical acumen was honed and sharp. They used clever positioning of zones/walls, went out of their way to discover their enemies weakness (both explicit such as Vulnerability and implicit such as Artillery being weak against close quarters combat), burned through some more old magic items, and employed good use of effective combinations of attacks. They owned this room, not because of luck, but because of skill.

A significant change I've made to the original adventure is substituting the legless, floating warlock Xam'kras with the resurrected corpse of a former adventurer to have died in the first steading to the Tomb of the Iron Lich, Yusht. Yusht is now a Lich Half-orc/Half-dragon Barbarian. He has a deep history with this group, as he was once a member, and it's very satisfying pulling him back into the fray. He has a tragic story of dying on the job, his friends unable to save him, and now being forced to serve under the enemy. Before the fight, the dungeoneers were able to wisely and skillfully sneak into the room for some reconnaissance. Seeing Yusht, they formed a surprise assault, targeting him first with their most potent attacks. He was quickly brought to within an inch of his un-life, but as any true villain, had a contingency escape plan. Before going, he was able to swarm the dungeoneers with the life-hungry spirits of those he has murdered. Yusht escaped, but killed one of the dungeoneers. The party Wizard was able to cast Raise Dead and bring him back, but at a steep cost. The party entered the dungeon with 59,000 gp and have spent almost all of it on rituals. They cannot use Raise Dead again until they have found a treasure horde to plunder. Though they are all alive, their safeguards and backups are dwindling quickly. One solution they have yet to find, is the use of the powers of The Willgrinder. Time will tell if they can puzzle this one out. 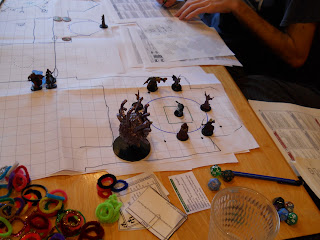 Death Throes: The ghost of Yusht as he was in life appears and decapitates its undead self.


Willgrinder Rebirth
You bring a creature’s soul back from the dead against the laws of nature and the will of the gods. Your subject is raised as a ghostly shell of its former self.

Casting Time: 8 hours
Duration: Instantaneous
Component Cost: 50,000 gp; or the permanent loss of 4 healing surges, shared among all participants in the ritual.

To perform this ritual, you must place a part of the corpse of a creature that died no more than 30 days ago. The subject returns to life as if he or she had taken an extended rest. The subject is freed of any temporary conditions suffered at death, but permanent conditions remain. The subject permanently gains vulnerable radiant 20.