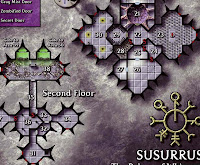 This post continues to document the journey through The Palace of Whispers, as started here. This post will actually be recapping two week's worth of play (again). Have at thee!


IF YOU ARE PLAYING IN THIS CAMPAIGN, DON'T READ THIS


Area 20. Dreadnaught Hall
When last we checked in, the dungeoneers had expertly ambushed the Iron Lich's cultist worshippers beneath a hulking dead husk from an Astral Behemoth. From the questions answered by the Grim Haruspex of the previous week, they send their Warforged Fighter into Tiamat's Altar to attempt to solve the puzzle. He does, expertly placing the eye-gems to form the symbol of Tiamat, and gains the following (ad hoc) benefit:

The Dying Breath of Tiamat
Property
The dying god of greed breathes the last remnants of her life into you. If you do not act quickly, Abilene's dark ritual will destroy your now-divine soul.

This creates an interesting new dynamic for the remainder of this campaign (in my estimate, 3 more weeks). The group's Defender is nigh invincible, but will be forcing everyone to either be very tactical and cautious (even more than before), or brave encounters without the aid of easily replenished Daily powers.

Area 21. Skin Sphere
A sphere of stretched skin, a womb of sorts, upon which countless bodies press against the walls. In combination with the new Flesh-Stitched doors (which were described upon examination as composed of infant Gith flesh), the players were thoroughly disgusted. The simple trappings of the dungeon from this point on begins to creep them out to the point that they are making mechanical/tactical decisions based on aesthetics alone. For example, in this room each character used the Power of the Mind ability to fly through; careful not to touch the gross walls, and then spent a Channel Divinity prayer to open the fleshy doors quickly. We've been ruling that short rests can't be taken without clearing an actual room, otherwise there are too many easy work-a-rounds to the challenge of opening all these cursed doors. Hence, burning that Channel Divinity prayer represented a real sacrifice on their part, all for the sake of style. The players are immersed in the game, and there's just a bit of suspension of disbelief going on.

Area 22. Face of Gith
The altar further creeps the group out, and they attempt to use the poisonous fluid dripping out to their advantage by bottling it and using it as a grenade-like weapon. I'm reminded of being 13 years old playing AD&D 2nd Edition and bottling lamp oil to burn imaginary kobolds. The nostalgia!

Area 23. Hall of Gith
The group shuffles through all the statues here and opens the sarcophagus, going through a quick fight with the undead consort of Abilene. During the fight, they notice that the multitudes of statues can rotate. An aha! moment occurs, as the now-seasoned puzzle-solvers open up this one with ease. I have been juggling which items are where, reserving the item found in Area 5's bell puzzle to be more rewarding for being so difficult to solve. Here, I place Fourthcore Armory's choker of unsettling restlessness and death god's razor. The group is really intrigued by these items (I guess no one owns FCA?), and are very excited about the synergies between the two.

Area 29. Tormentory
More creepiness, to the point that the players decide to come back to this path later because they need a break from the gruesome imagery.

Area 28. Knight's Sepulcher
I guess I spoke too soon about figuring out puzzles easily! Seeing few alternate avenues, the group reason that there must be more secret doors to find and discover them. In this room, they are immediately cautious due to the evidence of a dart trap in the ceiling and walls, and are stumped by a puzzle related to squares of prime numbers. They abandon this puzzle.

Area 24. Gehenna Sepulcher
One of my favorites, I'm so looking forward to the time when the group decides they're desperate enough to use this device. A cobbled together magic item of high risk and high reward, it defies all identification and is placed in a bare chamber. It's based on something I encountered at a GenCon game with Sersa Victory. It was awesome. I don't know if it was part of the module he was running or an on-the-fly creation of his own, but I've now adapted it to Fourth Edition. It deserves a reprint here, it's so good.

A steel cubed has been left in this room. The cube is covered in intricate gilded designs and each face has a different feature: a sunken black pearl, the visage of a snake-haired woman, a six-armed man, a skull, a winged faceless human, and a scarab beetle. This is a magic item, The Gehenna Device, but do not reveal the properties to the dungeoneers. The cube can be thrown on the ground (maximum 3 squares) as a standard action. Roll a d6 to determine the effect.

Area 26. The Black Heart
Thinking the lack of maddening whispers in this room to be some random benefit placed here with no effort to get to on their part, the dungeoneers will eventually come back here and take an extended rest. Suckers! There is now a running joke that Sean O'Connor's character is now in love with The Iron Lich and has a difficult time hurting her. 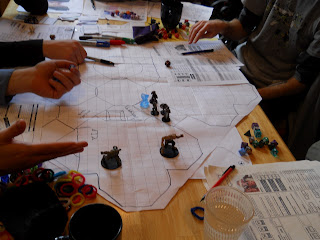 The group expertly sneaks up on the dim-witted Illithid Hulks and beats them to a pulp. Afterwards, they are elated to find and repair the grandfather clock, the final clue they need to solve Area 5's bell puzzle. A challenge which has been frustrating them since the first session.

Area 30. Trophy Vault
This was a great role playing scene. In the end it played out somewhat predictably, the group sided and freed the repentant Dragonborn and destroyed the enemies. However, there was quite a bit of back and forth among the party about this. Should they free the woman? Why not just leave? Is there any chance the Vrock's word would be true and t could grant them power? A lot different than the kill everything approach many 4E groups have been playing.
Also, everyone is creeped out by the decorations.

Area 31. Queen's Defenders
I swapped out the Champions of Tiamat for a trio of Liches. Then, on the second round, I brought the hammer down and had Abilene the Iron Lich show up and attack. It took exactly one round of pounding from this dungeon's overlord for the group to shift gears and focus on getting her out of the room. The group was suffering a massive amount of hurt from the Chain Blightning attack, so I relented and had Abilene cackle and retreat when she was force moved out of the room through an open doorway. She will thus be making return trips to mercilessly harass the dungeoneers and eat away at their resources. I've also created a list of alternate spells for the Iron Lich that will be playing a major role in this adventure in the future.
More on THAT another time.

Area 32 & 33. Tapestry of Flesh/Vile Tapestry
Another creepy room. One of the players asked me in all seriousness if they should start worrying about me, if this was the kind of stuff I was thinking of nowadays. I told them, truthfully, that only about half of this is my creation. That didn't settle their fears.
The group stumbled about, not thinking to look behind the tapestries for secret doors. They did, however, surmise that the grey mist doors are easily defeated by casting a Deathly Shroud ritual. Doors in epic tier have become the #1 challenge to the dungeoneers.

Area 34. Alchemical Brewery
A well-earned reward room, especially for the alchemically-inclined Gith Artificer. The group has been feverishly plotting on how best to use the trap-like alchemical weapons found within. They're luring their opponents and getting their minds into the game. I love it!

Area 35. Ectoplasmic Throat
Gross, but with Deathly Shroud still in effect, not much of a worry.

Area 38. Abilene's Reliquary
Skipping past the good stuff on the other side of the undiscovered secret doors, the group heads to the end of the dungeon and finds portals to two very important locations: the Tiefling Warlock (Mena) 's birthplace in Vor Rukoth and the Deva Wizard's birthplace in Ioun's chest cavity. Exploring these small dungeons is highly anticipated, as the group expects a lot of questions to finally be answered. It's like watching LOST sometimes here, the mysteries compounding and having just enough questions cropping up to keep you coming back for more. Let's hope it doesn't end as shitty as that garbage last season!
Exploring around, the group frees the Elf they see stuck in the Soul Trapping Mirror, releasing all within (friend and foe), and having Arkhosian reinforcements travel through the portals to join the fray in subsequent combat rounds.


Next week: ROLL FOR INITIATIVE!