Magic Item: The Tome of Abithriax 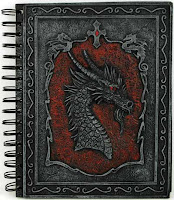 Here's an old magic item I'm dragging out from under the stairs in the basement, metaphorically. The Tome of Abithriax was a boon I gave to the dungeoneers whom last attempted (and failed) to stop Karax in The H1: Keep on the Shadowfell; given to them by their helpful adviser, Douven Stahl. It's a neat little item that encourages more ritual casting and has an appropriately themed dangerous power that tempts its bearer with a faustian this-for-that proposition. The little bit of backstory attached to it also was intended to set up some long-term foreshadowing into a possible delve through H3: Pyramid of Shadows by associating the item with the dreaded Kravakos.

The Tome of Abithriax
Wondrous Item
This musty leather-bound book holds the recorded secrets of the once powerful Dragon-Sorcerer.
The bulk of the work contains strange, arcane details describing of the inner workings of the universe. The eldritch runes contain dangerous information about the world that allows its reader insight into the mind-bending knowledge of all reality. It’s pages also detail Abithriax’s rise and fall. He allied himself with an ambitious Tiefling, Kravakos, and made pacts to the lords of the Nine Hells in exchange for the power to rule the world. Their hubris eventually caught up with them, and their alliance was destroyed from within.

Property: The tome contains the following rituals: comprehend languages, secret page, preservation, and detect secret doors. A character reading this tome can cast these rituals as if he or she had the ritual caster feat.


Secrets Best Left Unknown
You page through the book, learning of horrific truths that drive you to the brink of sanity.
Daily + psychic
Minor Action
Effect: Take 1d6 psychic damage. This damage cannot be negated or resisted in any way. Gain a +2 power bonus to the next attack roll you make during this encounter.
Posted by Ross at 10:01 AM

Email ThisBlogThis!Share to TwitterShare to FacebookShare to Pinterest
Labels: keep on the shadowfell, magic items, pyramid of shadows