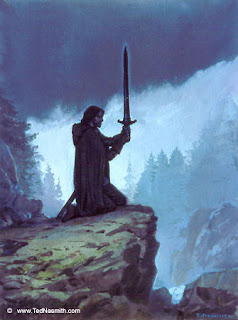 Anglechel, The Flaming Iron Star
Magic Item (heavy blade)
According to The Silmarillion, it was one of two swords forged by Eöl the Dark Elf out of a black iron meteorite. The sword was carried by Túrin, who had it reforged as Gurthang. It was said to have a will of its own, and to have spoken to Túrin when he used it to take his own life. There is malice in this sword. The dark heart of the smith still dwells in it. It will not love the hand it serves, neither will it abide with you long.

Property: When you use Anglachel to make an attack and score a critical hit, roll one additional die of bonus damage.

Property: When you use Anglachel to make an attack and roll a natural 1, you are hit by the attack instead of your target, and the attack is a critical hit.