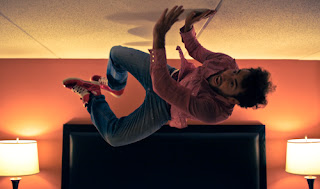 Continuing in the redux of Remains of Empire, here are some terrain powers that I've used with great success in the finale encounter with the adventure's villain, Bozidar. In it, the PCs confront the final enemy in the ruined throne room of the shattered, floating castle. The magic spells holding the castle aloft have been greatly weakened, and as such, being of sufficient skill can warp the spells. The Dungeon Master should go out of his way to show off these terrain powers to the players, by having Bozidar use them frequently and by having a lareg font printout of the terrain powers laid out on the gaming table.

This is a tricky encounter to pull off. It requires the participants to all think in three dimensions, and envision this room rotating about. While there are many enterprising ways of representing a three dimensional encounter, those of use without the patience or arts & crafts skills will have to get creative. When I ran this encounter, I used a small marker, a business card with a large arrow printed on it, to indicate which surface of the room was down. I then had extra tiles, the long 2x8's, placed down beside the floors to represent characters on the "walls". Relative to the real world table (and its real world physical constraints), all of the minis moved while the Dungeon Tiles stayed stationary.

Rotating Room
At-will Terrain Power (Level 6)
At-will
Move Action; Personal
Check: Arcana  DC 23 [Hard]
Effect: The room rotates 90 degrees in any single axis. Each creature standing on the current floor of the throne room must make an Athletics DC 15 [Moderate] check to hold onto the a peice of the wall or other stable object and dangle from the new ceiling. While holding onto the wall in this way, the creature grants combat advantage to all attackers. A creature may also make a DC 23 [Hard] Acrobatics check to land safely on the new floor. Otherwise, the creatures are knocked prone and thrown onto the floor, taking falling damage as appropriate.

Features of the Area
Stained Glass Windows: A creature that is knocked into the window when the room is rotated shatters the glass and must make a saving throw. On a failure, the creature falls 90 ft. down to a floating peice of shattered castle outside, taking falling damage as appropriate. On a success, the creature is prone, hanging onto the window edge.
Posted by Ross at 1:50 AM