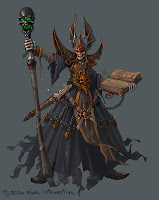 GLOOMWROUGHT, DEMENSE OF MAD SORCERERS – Random Event Table (d20)
One of the brightest lights in the gloom of the Shadowfell, Gloomwrought is a large walled port city on the shores of the Stormy Seas. Surrounded by a perilous bog called the Skins, most travelers enter the city by way of dark one ferrymen who navigate the Skins, by magical portal, or by ship.

Prince Roland the Deathless is lord of the city, but real power is in the bony, decrepit hands of the mysterious custodians of the city known as the Keepers, a cabal of powerful necromancers whom have discarded their bodies to pursue of an unnatural afterlife of willful undeath.