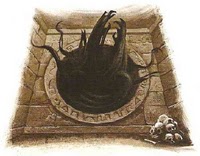 Here are the terrain powers I've used for the finale encounter of Keep on the Shadowfell. I feel like they add a little bit of spice where it is sorely needed. As written, the final encounter, the climax of the adventure, is fairly stale. Not completely, I love the grasping claws of the shadowrift gate. That's definitely cool.

Where do I start? At the beginning. The first thing the players face is the blood-slick chains descending into the dark recesses where Karalel is chanting his ritual. The adventure uses the elevation change as an obstacle where it could be used as a creative decision point. I decided that the chains aren't just there for shwo, and hoity-toity Karalel isn't going to climb up and down them everytime he needs to leave the keep. Instead, there is a rusty, battered lift system attached to the chains. Players now get to decide: should they take the fast and dangerous route by sliding/climbing down the chains, or should they take the slow and safe route via the elevator? For my campaign, one of the PCs was a Tiefling hunting for relics of his people's bygone past. Hence, I decided to describe the architectural style and engravings of the lowest leevls of the keep and this elevator in the vein of Bael Turath. I wholehearted suggest you do this with the entirety of the keep. Split the layers it up into epochs that have signifigance to your players or to your campaign. Let the PCs explore the keep and peel back the veils of history.

Slide Down the ChainsAt-Will Terrain Power (Level 6)
You grab a hold of a slippery, blood-covered chain and slide down.

At-Will
Minor Action; Personal
Check: Athletics or Acrobatics DC 15
Failure: Drop from the halfway point of the chains, taking 3d10 damage and being knocked prone.
Effect: Move to the bottom of the floor.

Ride the ElevatorAt-Will Terrain Power (Any Level)
You throw the winch to move this creaking, aged construct up or down.
At-Will
Minor Action;  Personal
Effect: The elevator starts moving. It arrives at the next floor at the end of your next turn. While in the elevator, you have cover (-2 penalty to ranged and area attacks).


Next, I wanted to add a little bit of mayhem and destruction. I added in the element of the Collapsing Keep when Karalel becomes bloodied. He is now hurt, and is having a hard time keeping the destructive energies of his ritual in check, and that is tearing the ancient keep apart.


Collapsing KeepAt-will Terrain Effect (Level 6)
The power of Karalel’s ritual is tearing the ancient Keep apart. The ceiling begin crumbling under the strain of dark energies, and peices of it fall to the ground.
No Action; Close burst 1
Trigger: A creature rolls a natural 1 or 2 on an attack roll.
Target: Each creature in burst, centered on the triggering creature.
Attack: +9 vs. Reflex
Hit: 1d8+6 damage and the target is knocked prone.
Effect: The area of the burst becomes difficult terrain until the end of the encounter.


Lastly, I wanted to have a way for the PCs to make decent attacks even if they were all out of daily and encounter powers. Spamming at-wills gets boring, and that sort of thing is bound to happen in an N+3 encounter like this. Well, that or the encounter goes really quickly from the party getting killed. So, here's a simple little terrain power for knocking the Orcus statues onto Kalarel and his undead servants, a fitting end to their reign of terror!

c Knock Over Stone StatueSingle Use Terrain Power (Level 6)
You put your shoulder into the hulking statue and topple it over.
Single Use
Standard Action; Close blast 3
Check: Strength DC 11
Target: Each creature in blast.
Attack: +8 vs. Reflex
Hit: 2d8+10 damage and the target is knocked prone.
Miss: Half damage.
Posted by Ross at 1:29 AM

Email ThisBlogThis!Share to TwitterShare to FacebookShare to Pinterest
Labels: keep on the shadowfell, terrain power