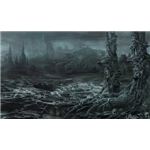 The sunken city of Moil is a dread chain of islands located in the bleak seas of the Shadowfell. The city harbors the tormented souls of all those lost at sea, as well as the inhuman and alien minds of fallen aquatic creatures from ages past. The waters around this group of small islands are clouded black by an unending stream of filth, liquified bodies and decaying matter. For miles around the air is thick with the stench of rot.

Heroes brave enough to face these perils, or fools stupid enough to venture here, face one of the most revolting locations in the multiverse, surrounded by a freezing cold, unending sea of diseased, putrid water.