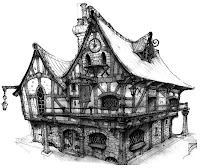 Expanding a bit from the terror-inducing vistas of The Abyss and The Shadowfell, I wanted to take some inspiration from Arkham Horror and apply it to a D&D locale so common that it has become cliche: The Tavern.

The tavern random events are much more tame and forgiving compared to the other Arkham Horror tables. It's a place of rest after a hard day's work plundering forgotten tombs, a safe haven; and so I've skewed the table to have less dire consequences, and more positive outcomes as a whole.

Still, I think this is a fun way to throw some quirky, non-combat fun at your adventurers. My suggestion would be to throw in a single random event every time the PCs bed down for the night at a common tavern or inn. Like all of the Arkham Horror tables, the events described here can sometimes be a little sparse in the details. That's where the individual Dungeon Master must step in and make it their own, providing the details that are specific to your imagined world.