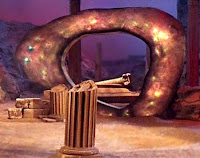 These three terrain powers are good for use when dealing with the fragile barriers between worlds. Use these whenever your group of adventurers are messing around with a wizard's tower, or an area with a connection to elemental energies or the Elemental Chaos itself.

The first two of these terrain powers are good in that they provide an easy way to add teleportation into an encounter. I like teleportation, because it can throw everyone for a loop and keeps the combatants moving around the field. This added action focuses the players at the table as to what's going on, because they must constantly re-evaluate what their character's strategy will be with every combatant getting moved around so much.

The last terrain power is pretty nice, too, because it adds a quick and easy way of throwing in extra damage. I like adding extra damage to an enconter, on both sides of the screen, to help speed things up a bit and add some swinginess to the fight. Especially at those higher levels, you can sometimes use a little bit of extra oomph to get things moving faster.


Faulty Portal Arch
At-Will Terrain
This portal is not currently functioning, but the teleportation magic that still imbues its stones makes the area around the archway hazardous.
At-Will
Minor Action; Close burst 1
Check: Arcana DC Hard by Level
Requirement: You must be adjacent to the portal arch.
Target: One creature in the burst.
Effect: The target is teleported up to 10 squares. A creature that is teleported into an occupied square takes Normal Low damage by Level and is placed in an unoccupied space nearest to its destination.

Barrier Between Worlds
At-Will Terrain
The energies channeling the Elemental Chaos begins to miss their mark, allowing you to momentarily step into another world, and then back into ours.
At-Will + Teleportation
Free Action; Personal
Trigger: You miss with an at-will attack.
Effect: Teleport up to 5 squares.