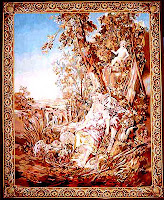 Rugs and tapestries are ubiquitous in fantasy themes, D&D in particular. The following two terrain powers can be used in a very wide variety of scenarios and adventures. For heroic tier I think they're fine, but always remember that when you bring your group into the next tier of play, you have to find a way to "up the ante" on things. You might be able to get away with just, I don't know, really big rug, but in general it's not a good idea. Your players will get thrown out of their immersion when they see the same boring challenges and items (terrain powers , monsters, etc.) just with higher numeric values.

For the Paragon tapestry, I would suggest describing it as a silken filament of web from Shelob's Lair that  restrains the target. For Epic, it can be the structure to a Far Realm portal, removing the target from the encounter.


c Pull the Rug Out
Single Use Terrain (Level 4)
You grab the hem of the carpet and yank it up hard.
Single Use
Minor Action ; Melee touch
Check: Strength DC 10
Effect: You pull the carpet up and over anyone standing on it. Each creature standing on the rug is knocked prone.

c Hanging Tapestry
Single Use Terrain (Level 2)
You pull down the ornate tapestry from the wall and cover your enemy.
Single Use
Minor Action ; Close blast 2
Check: Strenth DC 9
Attack: +5 vs. Reflex
Hit: The target is blinded and slowed until escape (Escape DC 9).

c Far Realm Filament
Single Use Terrain (Level 22)
You pull down the ornate portal archway creating a gate to the realms of madness.
Single Use
Minor Action ; Close blast 5
Check: Strenth DC 20
Attack: +25 vs. Reflex
Hit: The target is removed from play (save ends). When the target saves out of this condition, it reappears in the closest unoccupied space to where it originally disappeared from.
Posted by Ross at 1:51 AM