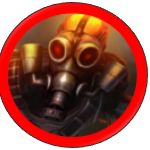 War and conquest had always been what his clan had known.  The low rumble of engines of war was the sound of peace for the entity known only as Brand.  He was once a human wielding great prowess in battle.  Each victory was etched into his skin by the shaman using ritual irons made from the talons of a dragon kept in a forge holding embers of fallen stars, and then covering the wounds with ashes of the pheonix.  It was believed that as each victory scar displayed on the body also be burned into your memory to gain knowledge.  After countless battles, Brand became a shell of his former self, knowing only the way of the sword.  He enjoyed the battle, and when the shaman could no longer place marks upon his body, he began to do it himself with a ritual dagger imbued with a fire elemental heart, keeping it ever burning to the touch.

He was there when the Heresiarch first descended on this world and he was one of the first to be killed.  Brand was captured by the priests, and out of spite and mockery of his clan's beliefs, ritually sacrificed him by releasing the elemental trapped within his dagger, and tainting it with the black flame who's fire can never be extinguished.  Flesh and organs burned away leaving only char and cinders.  All the marks of his past battles erased from existence.  It was the ultimate shame to himself and his clan.  To make an example, his body was returned to his clan still ablaze with the black flame as a reminder of what any further transgressions will be rewarded with.  Desperate times called for desperate measures, and in secret, his clan's shaman turned to the dark arts, calling upon the same ritual to bind that which killed him into his own soul.  The price for such a ritual was high however, for when Brand awoke, he was surrounded by the ash and cinders of his former village as it was consumed by the black flames.

Seething with wrath and hatred, Brand took up his sword once again.  In battle, wounds that would slay any normal man are burned away by the black flames, fueling his rage.  Every battle is one step closer to the end, one way or another.  Until the black flame is extinguished, this shell of an existance will continue to purge all he can with his burning vengeance.

"Humanity may be lost, but this place will burn by the vengeance of my hand"