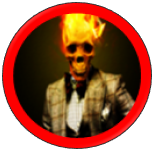 As the Heresiarch rode into the sky on his comet of fire, a blind hermit approached Kaddim's tribe in the desert, claiming to be a prophet that would guarantee their salvation.  The tribal chieftain scoffed at the idea, thinking the hermit mad and was prideful of the tribes strength, both in magic and combat.  The hermit was beaten, branded as a mad man, and threaten with death upon return.  Soon after as the faceless priests walked the land, most of Kaddim's tribe was decimated by a wasting disease for their refusal to submit.  Kaddim was one of the last to catch the plague, and as he was breathing his last, the blind hermit returned, dragging him off to "save him and fulfill the prophecy".

The hermit worked quickly, binding and infusing elemental energies to his soul and body; wracking Kaddim with pain, burning away the humanity inside with fire and lightning and  thunder.  This pain broke his link with the mortal world and with humanity. Once he had recovered, he left the desert to seek his destiny and meet the Heresiarch head-on.  Each step forward pumps thunder through his veins, and even step closer to the heresiarch strengthens the elements within that now make up his blood.  What will happen when he encounters the Heresiarch?  He does not know.  But with the din of thunder in his ears grows daily, and he fears what he may already know. He is a bomb about to reach its target.
Posted by Ross at 4:47 PM