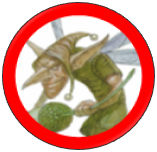 In his travels, Nettle has always heard the old tales of growing up in an idyllic Sylvan setting, a time where all spent their days dancing merrily in worship of Corellon and other abandoned gods of goodness. He clings to those old stories as a buoy against the stark truths of the world; of the fey genocides in the natural world, of the enforced serfdom to the Eladrin high king, the miserable existence most of his kind share as they toil eternally to manage the changing of the seasons, the harvesting of all that the forest has to offer to sate the immortal appetite of their overseers. He never tells them of his broken people, who clutch to the memory of heroes of the past, too afraid to rise up and fight for their freedom. Disgusted as much with his own weak kind as with the traitorous Eladrin, Nettle has left to make a name for himself and to find stories of true heroes in hopes he might one day return with the Heresiarch broken and offer examples of valour to inspire his people.
Posted by Ross at 9:27 AM