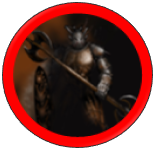 Oros was a good man, was a good father, husband and son but that was before Heresiarch came.  A simple woodsman, Oros could not help but see the might and power of Heresiarch and was the first of his village to kneel before the Faceless Priests.  He could not understand why anyone else would resist such a true and powerful being. Where were the gods of legend?  Surely they bowed before the new order as well for they did nothing to prevent the Heresiarch’s rise.

In his service to the Faceless Priests, Oros helped convert his village and show them the proper order of things.  The Faceless Priests saw to it that anyone who resisted met with their doom on a chopping block, their heads severed by Oros’ axe.  First it was malcontents and dissidents, villagers Oros disliked, and he even took a little pleasure in helping them to meet their doom.  Then it was his acquaintances, friends then family people whom Oros had a hard time understanding why they would not accept the new way of the world.  Oros realized the error of his ways when he looked into the tearful eyes of his daughter’s severed head. His soul bruised and battered Oros hacked down the nearest priest and began his quest to bring down the Heresiarch.