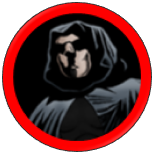 Talon grew to manhood in the slave pits of Talia. Toiling day and night for his draconic masters, the young shadar-kai knew only the back-breaking hardship of the mines and the savage cruelty of the whip. Talon's prayers were finally answered the day the sky opend up and Talia was obliterated by the great meteor. Spared the celestial energies that destroyed the surface, the slaves of the residuum mines took the opportunity to make their escape. In the battle that ensued between slaves and guards, Talon strangled the guard watching him with his own shackles. The newly freed slave made his way to the surface and promptly fled the Fallen Lands.

Travelling across unknown kingdoms, Talon has found the same cruelty and savagery of his upbringing everywhere he has gone. Revering the capricious and powerful Storm Lord, he has learned that the only thing one can rely on is power; strike your enemies down before they have a chance to raise a hand against you.

Talon has now risen to put a stop to the being known as the Heresiarch. Never again will Talon bow down and live a life in chains. He would sooner die.