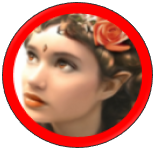 Carnivus Clay, the Calligrapher of a somber elven village, went mad 26 years ago when he witnessed a symbol burning red above his daughter's crib. Etched into the rotted wood was the rune of an unspeakable death, dripping with a slimy crimson acid. As a symbolist, Carnivus knew this was a sign, meaning his daughter would inevitably encounter a gruesome death, even though she lay peacefully sleeping, just an infant. He cursed the skies and blamed the human whore who birthed her. He cornered Carefia's mother in the dancing flames of the furnace and stabbed her repeatedly with a quail calligraphy pen, ink and blood binding in a pact of future pain. Then he took his own life by walking straight off the redwood canopy in which their domicile was nestled.
Carefia was never told of this foretelling, she was raised under her father's brother, studying her father's tomes of symbols and runes and wielding their powers. But an itchy sensation, a goose-bump gust, or a strangely dark shadow would always bother her peripheral.
She knows that death is coming as the Heresiarch arrives, she only hopes that she can carve a symbol of her own into the face of the faceless priests first.