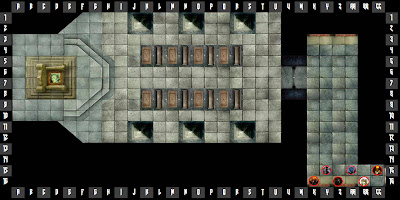 This black marble cathedral is well-appointed with baroque balustrades, grotesque frescoes, and gilded tapestries depicting a hooded figure riding into battle atop a bipedal serpent.


Two rows of polished wooden pews lead toward a hemispheric altar. Dozens of rotting skeleton parishioners have been chained to the benches.


All of the chains snake toward a hollow glass throne at the head of the cathedral, each ending in a black iron ring set into the floor at the throne’s base.


A striking, emerald-haired woman wearing a crimson sash reclines in the throne. She picks at the carcass of a dead feathered animal to her left with a silver fork.


Six embossed obelisks rise above the pews, three on either side of the chapel.

The faint outline of a hidden door is found behind one of the tapestries, however no known means of opening is discovered.

The woman identifies herself as Lahamu, jilted wife of The Heresiarch. She treats with the dungeoneers and promises them her wedding dowry in exchange for the head of Sorrow Nimbus, the suspected mistress of The Heresiarch.

During the talks, Lahamu becomes smitten with the grace and beauty of Nettle, offering him a drink of her wine. Nettle accepts, and is blessed with Infernal Resistance. He gains 66 temporary hit points (that last until he takes a short rest), resist 10 to two different energy types (choice of acid, cold, fire, force, lightning, necrotic, poison, psychic, radiant, or thunder)

Upon closer inpection, the six obelisks are found to have the following saying and images etched onto their surfaces:

Image: Two mariliths copulating with a balor.
Inscription: ‘Hallowed are those who indulge their carnal appetites, for these are the blessing of the Heresiarch. Suffer not modesty or chastity.’


Image: An impossibly obese demon shoveling an army into its fanged maw.
Inscription: ‘Hallowed are those who feast on the flesh and spirit of their quarry. To fast is to turn one’s back on the Heresiarch’s bounty.’

Image: A well-dressed human couple adorned with jewelry. They are surrounded by treasure.
Inscription:  ‘ Hallowed are those who seek wealth and power in the Heresiarch’s name. The spoils of the mortal realm belong to the faithful, and it is your duty to claim it.’


Image: A field of peasant men and women being burnt upon wooden crosses.
Inscription: ‘Suffer not dissent and heresy. Cleanse the blighted lands with sword and fire and conquer those who would defy the Heresiarch.’


Image: A warrior in spiked mail crushing the skull of a laughing pharaoh.
Inscription: ‘Let no transgression against you go unpunished. It is through retribution and wrath that the Heresiarch’s divine glory is known. Mercy is weakness.’

Image: An iron fortress wrapped in lightning. Impaled heads line its coiling buttresses.
Inscription: ‘Hallowed are those who boast of their conquests, for
they glorify the name of the Heresiarch. To be known and feared is the highest virtue.’