At long last your efforts to penetrate the Heresiarch's citadel have paid off. After stepping through the mystic red smoke outside of the Heresiarch's demense, you find yourselves at the apex of a watchtower jutting from a deep hole in the surface of the Underworld. Carrion birds circle feebly through the air, viewed from a distance. 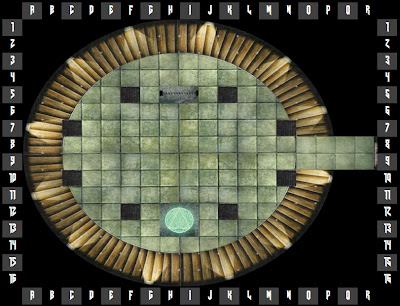 This open-walled pavilion stands atop a 100 ft. tall tower. The low ceiling rests on top of a ring of brass pillars shaped in the likeness of mortal men whose necks have been crushed and broken by the ceiling’s weight.

The pavilion rises just above the rim of a deep, narrow hole in the lifeless gray surface of the Underworld. A sky of ruddy fire is visible, and from it great mouths vomit the corpses of the damned into distant city-sized funerals.


A 10 ft. diameter standing circle of stone rises in the center of the pavilion (squares H5, I5). Intersecting geometric forms and glittering constellations have been embossed onto its surface.

A slightly raised floor tile in the southern quarter of the pavilion (squares H12 - I13) is inlaid with mosaic tiles that form an inverted trident. The tile casts off violet sparks.

An archway of sulfurous brimstone reeks in the air to the east.

Four planet-gems are found in the Heresiarch's deadly domain. When fitted into the stone diagram, a violet portal appears in the archway and a fifth slot open.

A fifth planet is discovered and placed, revealing a hidden sixth slot and the Staff of the Serpent Rider appears above the raised floor tile.


OOC: Greetings, mortals! Are you ready to die?

The game is not in a time-sensitive situation, such as combat, so please post actions via Comments below in a free-form style. If moving or interacting with an object, try to be a clear as you can.

When a dungeoneer perishes in the Fane (50 point penalty, or 75 point penalty due to death by Blight), that player may re-enter with another dungeoneer chosen from their starting roster (3 dungeoneers total per player). If a player chooses to do so, the new dungeoneer joins the party at the end of the current encounter, or immediately if the death occurred outside of combat.

Are you a bad enough Elf to kill the Heresiarch?
Posted by Ross at 8:40 AM