After the introduction into my Fourthcore Megadungeon (linked here), the question was asked of me:


How do you run an extended [Fourthcore] campaign with all the dying? Doesn't that get old/boring/difficult to maintain continuity/messy?"

and here, I shall reply with a quote:

" Without pain, without sacrifice, we would have nothing."


The death of a major character is a profound and meaningful experience in any storytelling medium. Additionally, the possibility of failure, truly failing, is absolutely crucial to any kind of game. It's the darkness that creates light, the reason to savor victory. So when playing Dungeons & Dragons, this weird hybrid storytelling game, the threat of real failure is core to the experience on multiple levels of interaction. When I began to craft the Fourthcore Megadungeon that is BADASS DUNGEON CRUSHERS (BDC), the concept of failure and expected character death was a top priority.

With this megadungeon, nine seemingly disparate D&D adventures are strung together into a cohesive, and deadly, whole. Those adventures that did not already feature brutally punishing odds, instant death traps, and permanent debilitating character penalties were "amped up" to match their brethren. I actively sought out to create scenarios wherein the players had a good chance of losing and their characters a good chance of dying.

I'd like to avoid discussion on the merits of this philosophy for the time being, it deserves a more thorough treatment, and move onto the means and methods of making this work.

In BDC, the dungeoneers are tasked with the overall quest of ridding the world of the nine dungeon lords. To do so, they must take the last heroes of the world and stead the blasphemous dungeons beneath the Holy Mountain upon which sits Gardmore Abbey. In total, there are 50 available heroes in the world. The players take charge of 6 of these heroes at a time, activating/creating a new hero and exploring their contributions to humanity as the previous hero dies.

This method of playing D&D never gets old and boring. Quite the contrary, it dispels the monotony and boredom of the Rules As Written and Rules As Implied ways of doing things. When I hear people telling stories of playing the same character for years on end, I think to myself "How boring! That must get old."

Creating characters in 4E D&D is really quite fun, at least for nerds like my friends and I. Dear readers, have you never built a D&D character for a non-existent game, just to mess around? I've made dozens. At this point in time, the game has such a wealth of character options available that it's almost impossible to play all the different variations. My creativity isn't limited to putting out a single character per D&D campaign. Campaigns take a long time, sometimes years, and I'm popping out new ideas each and every week. A high rate of character death and an accommodating story line that confronts and embraces this philosophy is highly conducive to new and exciting ideas.

There are no continuity issues and this is not a messy way to play. Two simple sentences form the entire structure of the campaign plot (see primer here). The campaign is not a novel, it is not a grand 1,000 page medieval fantasy story. The plot serves at the pleasure of the characters and their actions. It gets the dungeoneers to their dungeons, and that is where the fun and excitement happens. No matter how well crafted a campaign backstory is, most players simply don't give a shit. For the same reason that Dungeon Masters love their carefully scripted stories, the players just care about themselves. Don't just take my word for it, Ben Robbins says so as well (linked here), in so many words, in the much lauded Western Expanse campaign. Back east is boring, the fun happens in the dungeon.

Anyway, with this type of plot, all 50 characters are part of the story from Day 01. Because we're  just normal, fallible people playing this game; we only explore 6 personalities at a time, but in the background, in the story happening behind the scenes, all of the characters are there. They are all united together, sharing their stories and their goals. When a character dies, their chapter might end, but the book continues without skipping a beat as a new, fresh face is brought into the "main cast". As Dungeon Master, there is never any worry on my part of derailing a delicate story. The story is in the hands of the players, and they've got 50 different ways of solving it.

Having our high death rate is not quite enough. I've found it's very important to keep the causes of death ultimately avoidable. This doesn't preclude unfair scenarios, far from it. Often, a character's death provides the necessary observable information to figure out the solution, the trick, the gimmick, to overcome an obstacle. Because of this, the players never come to the table half-assed. They always bring their "A-game", they're always sharp and alert, looking for clues and danger. They know that they can beat this game if they're smart about it, and they're right. 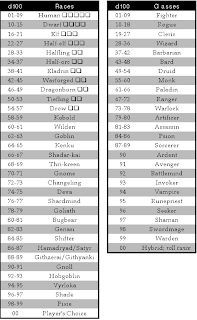 To add even more spice and excitement to BDC, we've been using this chart of random races and classes to determine new characters. I've talked about the early seed of this idea before (linked here; holy crap, all the way back in March!). In my experience, it is often useful to throw a monkey wrench of chaos into the creative process. It creates a challenge and a point of interest from which a new and fascinating idea emerges.

"How does one create a viable Goblin Invoker? What are the possible synergies with a Bugbear Rogue? A human? Oh man, what luck! You've got a primary ability score boost in whatever class you get!"

In BDC, we've seen many bizarre and "sub-optimal" combinations for characters that have been very fun to see at the table. The random charts here eliminate the pressure on the player to choose the "correct", most optimal character and encourage creativity. This isn't some theory of mine, I'm not guessing what would happen. I'm living the dream and telling you what happens.

I certainly don't think random characters are necessary for every game, but I think every D&D player should try it at least once to gain a new perspective on a different way and a fun, new challenge to their way of playing.

I think there are a great many D&D players who use the game as a form of infantile wish-fulfillment. To those types of people, the rules of the game are only there to provide a structure from which they use to justify their neuroses. This kind of person would love to just write a book about their character, keeping tight control over each and every thing that happens in the fantasy world. However they have neither the talent nor the audience, so D&D fills both of those voids. Killing player characters shatters the fantasy and forces the player out of their self-created, isolationist cocoon of safety and comfort. Even in the fake world you can be a loser, and that is terrifying.

Is this the kind of person you want to be?
Posted by Ross at 3:03 PM