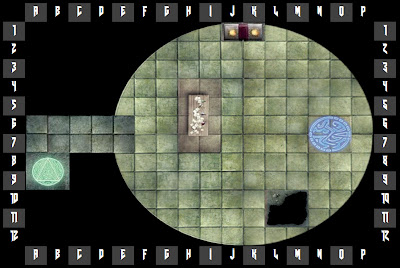 By means of a teleportation spell, the dungeoneers arrive here (squares N6 - O7).

An opaque glass dome rises high above this circular observatory, the colored gems set into its surface forming strange constellations.

The constellations are arranged and look like the following: 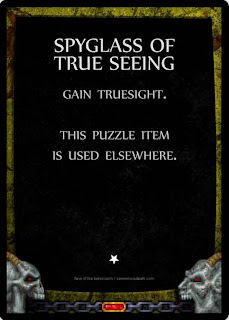 A stone table stands in the center of the chamber. Numerous charts and astronomical tools litter its surface (squares H4 - I7). Among other things, it contains the Spyglass of True Seeing.

A glittering black rock the size of a carriage is set against the southwest wall. Several humanoid skeletons have been partially-excavated from inside of it (squares L10 - M11). It has the color and texture of charcoal, and bears signs of recent chiseling. 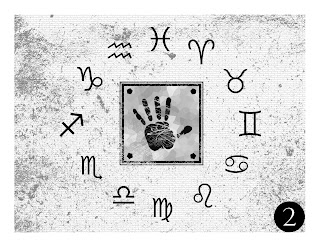 A crystal plaque with a hand print is bolted onto the eastern wall (squares J1 - K1).
Lord Xann's hand has been pressed against the palm, and twelve symbols appeared around it, glowing.

A glowing crimson portal sheds ruddy light onto the western hallway (squares A8 - B9).