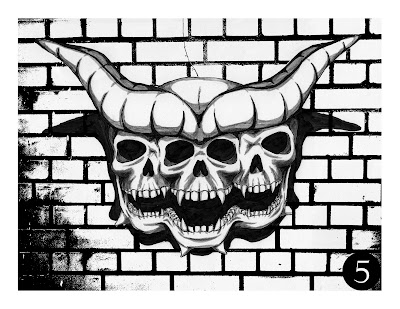 A few candles scattered across the floor are the only illumination in this room. The space itself is a large circular room topped with a low-hanging dome. The dungeoneers are appear instantly here, in the center of the chamber.

An enormous stone face 8 ft. in diameter is set into one curved stone wall. It has been hewn into the likeness of three conjoined tiefling skulls, its disfigured, fanged mouth wide open. There is only blank stone wall in the gap between its crooked teeth.

Twelve smaller faces, each appearing as an emaciated crowned man, ring the dome at regular intervals. They are fixed into the wall at shoulder height, their mouths opened far too wide, like that of a serpent. These stone faces are 3 ft. in diameter.

Seen through the glass eyes of the twelve stone faces are tiny porcelain dioramas, each depicting a different scene:

Kaddim places his head inside the mouth of one of the stone kings and is asked, "What was nailed to the archway atop the watchtower?" He responds with a muffled cry. The jaws of the stone king's face crunch shut, decapitating Kaddim in a fountain of blood. Forevermore, Kaddim's spirit will haunt this chamber, whispering from beyond.

The Guardian's questions are answered and the Dome of Interrogation is defeated. A swirling crimson portal appears in the place of Cerebus. The final confrontation with the Heresiarch is at hand! 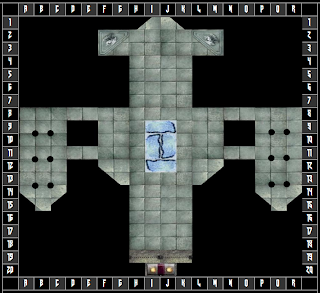 Tordek burns the Veil of Scrying, gaining portents about what lies ahead. 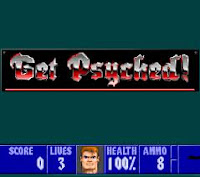