BADASS DUNGEON CRUSHERS (BDC) is the tongue-in-cheek name given to my currently running Fourthore Megadungeon D&D campaign. The name stems from the Dungeon Bastard post awhile back (linked here) and captures the spirit of competitiveness and struggle in our games, and also meshes perfectly with the level of self-awareness my group has for how ridiculous even the most "serious" of roleplaying games are. This campaign started up as a series of responses to problems I had been having both in and out of the game world. This series of posts on DMG42 will be going through those problems and the solutions we came up with in the hopes that you, the reader, can take our example and improve your own games.

Synergies and verisimilitude of the system, both mechanical elements and the campaign world, were very important to me and at the forefront of my thinking during design  Synergies help create a unifying sense of immersion in the game. With each piece of the puzzle that interacts and fits with the other pieces  the whole of the campaign is strengthened. So, I'll also be talking about how each of these pieces interacts with the others.

Today's post will talk about some of the overarching goals and big picture design ideas I had in mind for this campaign.

The first step in any campaign is to work out the real-life logistics of this thing. My previous campaign schedule simply was not cutting the mustard, and I fucking love mustard. Thus, Step #1 was and will always be figuring out the best way to get together with your buds and talk about wizards and dragons and shit.

I was itching to get back into the D&D groove and really had my eye on quite a few adventures out there that I had wanted to explore a little bit further, and some adventures I had that had never seen any use in my groups at all. It's no surprise that I'm a big fan of Fourthcore, so at the top of my list were the five adventures at Save Versus Death and the two adventures at Dungeon Oracle. Rounding them out were WotC's Madness at Gardmore Abbey (MaGA) and Cairn of the Winter King (CotWK). Lastly, I knew I wanted to find room for a whole host of assorted puzzles and creature ideas I had brewing or had seen around (they would later all find homes replacing boring encounters in the WotC adventures).

Many of these adventures had been explored by my group and I, although for these particular rapscallions I made sure that every dungeon was brand new to at least two players. Why I wanted to revisit these dungeons, though, was to delve deeper and really explore these great scenarios at our liesure. We had already tasted the sweetness of panic and terror that is the time one-shot version of the dungeons, now it was time to luxuriate and explore them full-on. We were going to scratch the completionist itch.

For the veteran Fourthcore delvers, I made sure that the most iconic and memorable challenges that we had previously delved would come back looking very familiar, but with added twists and new solutions to be sussed out. For example, Revenge of the Iron Lich's three treasure chest puzzle would instead be NINE treasure chests, the solution of which would be wildly different and much harder to figure out.

Sidebar: WotC
I felt that MaGA and CotWC both had a lot of potential as Fourthcore dungeons. Certainly not as written, but both had a good deal of exploration, a good structure, and interesting backstories to be uncovered. I took it upon myself to use those two adventures as the framework for something of my own creation that was to be far more deadly and far more interesting.

I'v been fascinated by megadungeons recently, and this seemed like a perfect application for the idea. The nine major adventures I wanted to delve into more fitted in as nine major dungeon areas, with the bloated MaGA serving as both dungeon site and overworld map to connect all the dungeons together. Additional, new dungeon connections would later be added with stairways, hidden passages, and mysterious portals Jaqueying the dungeons all over the place. My goal here was to create the sense of mega in megadungeon, that the whole thing was absolutely enormous and couldn't be mapped easily, and also to provide ways for clever dungeoneers to move about from one dungeon to the next in new and creative ways. It also allowed the dungeoneers to randomly stumble into ultra dangerous rooms with no hope for victory, but I digress.

The most common way a D&D campaign dies is by petering out to a whimper, a shell of its once-proud glory, due to the inevitable changes in real-life schedules and situations. This has happened to my games time and again. I had a Sunday morning game that ran for years, but eventually it had to stop. The solution here is to recognize this problem and embrace it. Most D&D campaigns do not last a longer than a year; many quite less than that. With that in mind, I sought out to create a campaign of finite scope that would succinctly tell the tale I wanted to tell. Hence, BDC would be strictly a Level 6 to Level 10 affair, something like 6 months of play, ending right on the cusp of the Paragon Tier and all the heinous complexities that come with that.

Side Bar: Why 6th Level?
I had originally envisioned the campaign to start at 1st Level, with the simplest and easiest mechanics. But, due to the race/class rules discussed below. It was brought to my attention, however, that adding in a few more levels would make repeated character building a lot more fun by freeing up more feat slots and allowing some fun sub-optimal builds with interesting racial feats. 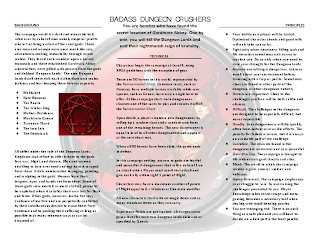 Before the first game, to whet everyone's appetite for dungeons, I crafted this Campaign Primer and sent it out. I purposefully omitted many details, chopping down the campaign into three succinct sections. The tone and expectations of the campaign itself can be summarized in the line, "You are heretics who have found the secret location of Gardmore Abbey. One by one, you will kill the Dungeon Lords and end their nightmarish reign of brutality." An admittedly shallow plot that would serve our group perfectly. The game was about dungeons and dragons and shit, no one in my circle of friends really cares about intrigues at the royal court of Greenwood. And in fact, this primer also served very well in not wasting anyone's time if they were into games about other things. A good friend of mine respectfully bowed out of the game invitation based on the Campaign Primer because he felt it wouldn't be that fun for him. That's cool, man! No harm, no foul, because we are being upfront and honest about what kind of game is really going to happen here.

With my nine dungeons lined up, I began exploring the idea of the number nine in numerology, the ennead, which would later filter down into my puzzle designs.

This post is hella long already, so I will be wrapping up for now. In future posts, I'm planning on getting into more detail on all the myriad of elements that combine and overlap in this campaign to create the unique, exciting, and memorable experience that it truly is. For now, please drop me a line in the Comments asking about particular areas of interest, I certainly don't want to write about things no one cares about, and content thyselves with browsing through the scatterbrained, nonsensical and inside-joke-filled Badass Dungeon Crushers ongoing campaign log (linked here).

Email ThisBlogThis!Share to TwitterShare to FacebookShare to Pinterest
Labels: fourthcore