The following is intended for the play-by-post delve of SND-02: Fane of the Heresiarch.
Vitals + Rumors + Crusaders + Score 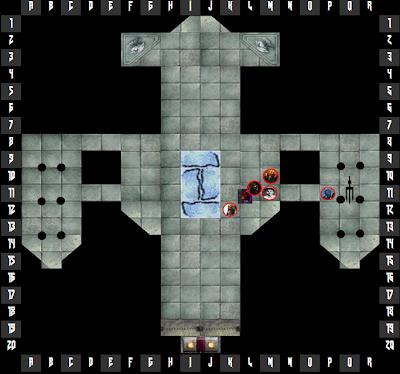 The ceiling of this vast chapel has fallen away, revealing a city-sized glass dome above. Monstrous iron bands reinforce the dome, each straining to hold back an endless ocean of churning black water.

A pair of ruddy moons float in the water, moving in and out of view and casting long shadows that drip into the recesses of the grotesque idols that stand along the walls.

A brimstone tier rises in the center of the chapel (Squares I9-J12; blocking terrain), atop which stands a vertical mass grave enclosed by a wall of force. It looms nearly three stories above the bloodstained floor.

An altar in the south wall is barred by a portcullis constructed from petrified vipers.

The Heresiarch: Conqueror of ten thousand worlds, the Heresiarch appears as a faceless humanoid wrapped in a flowing, gold-trimmed robe the color of dried blood. Spines just from its shoulders, and two scaly hands grasp a curved trident that crackles with violet lightning. Three small cubes inscribed with astrological runes orbit the Heresiarch’s head, pulsing with mana each time it unleashes a magic attack. Those who draw near to the Heresiarch spy a row of reptilian teeth and red eyes of fiery cinders beneath the hood.

Chaos Serpent: The Heresiarch rides on the back of a large bipedal serpent with leathery scales and an oversized maw. Its hide is covered in curved horns upon which dozens of crusader skeletons are impaled.

Oros springs to action, defeating the Heresiarch in initiative. Tordek the Spy double-crosses his former master and jupms ahead to attack!

Utter desperation and frantic fury cross Oros' face. All the struggle, all the pain, all the victory; it is all worth NAUGHT is he should fail at this moment. A quartz elixir is opened, the first taste spilled onto the ground in memorial of those so recently lost, so their spirits might lend him their strength.

THE TRIDENT OF TOTAL DEVSTATION IS PULLED FREE, SAVING THE UNIVERSE!!!

Lightning arcs and sizzles over Oros' sculpted and straining muscles. A howl of fury and TRIUMPH is let loose echoing across the whole of the world!!!

The lands beyond have called forth, but Nettle's time on this mortal world was not quite at an end. He must fight through the pain, through the utter AGONY of holding onto this world, resisting the eternal bliss of the next life.

Tordek's axe strikes true, yes, dropping the Heresiarch down to its knees; but the millenia-old Dwarf, the last of his kind, is a creature of flesh and thus is weak. A material being is simply not able to overcome the awesome power and mystery of an immortal being of unholiness such as the Heresiarch.

Just so, Nettle fuses his spirit INTO the body of Tordek, becoming one. Muscle screams in revolt, this body simply not capable of such a task that it is now accomplishing.

With the Heresiarch on its knees, head down, the axe of Tordek-Nettle executes the greatest evil to ever walk the planes of existence.

The Heresiarch lets out a deep, discordant scream – a cry so loud that the dome above buckles and shatters, sending shards of glass and torrents of black water tumbling down into the chapel. Arcs of lightning slither down from the broken iron supports, each bolt lashing against the Heresiarch’s broken body, stripping the vestments and scales from its yellowed bones.

The remaining crusaders all freeze to death or drown in a matter of moments from the rushing ocean of freezing black water above, their last sight that of the scorched Heresiarch’s skull floating down into the darkness, crimson bubbles rising from the cracks between its four sets of jaws. They are victorious in death – the Heresiarch’s threat ended once and for all.

FOREVERMORE ARE THEY NOW RAISED TO THE STATUS OF GODS!!!

A new pantheon is ushered in this day, the lifeforce of the Heresiarch and all deities that have fallen under its might now feeding the spirits of the noble 10 dungeoneers who hath vanquished the dark lord!
Posted by Ross at 12:31 PM