Each dungeoneer starts their turn appearing in square B1, having already spent their Move Action to step through the portal in the Observatory. Dungeoneers must move quickly out of the alcove, lest they be telefragged by their incoming allies. As such, initiative order is quite important:
Oros
Lord Xann
Nettle
Brand
Kaddim

The stone walls, floor, and 20 ft. high ceiling of this bare chamber have been worn smooth as if by hundreds of years of erosion. 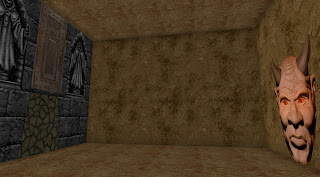 A marble demon’s face is set into the center of the west wall, to your right. Fist-sized rubies glow from within its

A Constellation of Living Spheres of Annihilation is vomited from the demon mouth and moves to snuff out all life. The astral travellers slip through the voids between the bonds of matter, effortlesly passing through stone and steel. The ever-hungry collection of void settles onto Mikhail, disintegrating his body into nothingness! Forevermore, Brother Mikhail will haunt this room, lending the Might of the Dead to those who would oppose the Heresiarch. 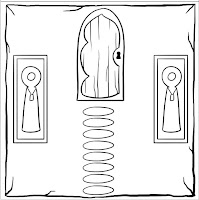 An iron door is set into the east wall, 10 ft. above the ground. Flanking the door on either side are mithril plates etched with the image of a robed acolyte wearing a trident medallion. It grinds its way down the hall to eventually crush everyone within this chamber. 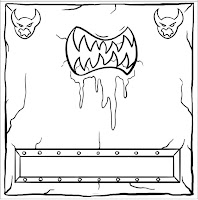 The door is unlocked, to reveal a second moving wall. A superheated iron plate is bolted to the bottom 5 feet of this sliding wall’s front face. (Creatures ending their turn adjacent take fire damage). Two iron balor skulls are also set into the top of the wall’s front face. A 10 ft. wide set of mechanical jaws bite down over an opening that leads through the wall. There are  blood-soaked slits in the north and south walls. The iron balor heads are, in fact, a cruel and hideous mechanism that fires an unending stream of superheated masonry nails in front of the wall. The nails are shaped like open-mouthed cobras. 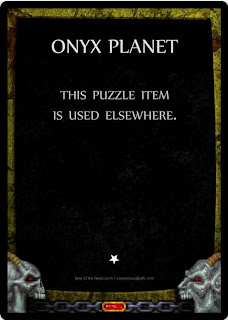 From the blood-splattered slits in the walls (Columns K, J, I, H) come a hail of razor-sharp serrated blades, each of them imbued with a cursed rune of unholy necromancy upon its shining surface.

Running through magical portals, the dungeoneers evade death at the hands of molten hot cobra nails and claim the Onyx Planet before returning to the Ashen Ambulatory.
Posted by Ross at 4:01 PM